I received an invitation recently from Julie Tarmy, Executive Director of the Nahant Historical Society to take a look at a very interesting document. Created in 1797 by 13-year old Lydia Bishop, it is a 22-page manuscript of geometry written out when Lydia was a student at Mr. Wyman’s School in Medford, Massachusetts. The book came to the Nahant Historical society by way of one of Lydia’s descendants, W. Donnison Hodges, Jr. of Nahant, Massachusetts, who has generously loaned it to the NHS. Every page of the manuscript is a feast for the eyes. The manuscript is quite large, measuring 15” x 20 1/2”. Since it is a child’s school workbook, it is, of course, completely hand lettered and hand decorated. However, as an historical document, it shows a delightful level of sophistication. The beautifully embellished letters on the title page (photo 1) incorporate both a lovely script and handsome pen-drawn Roman letters. Drawn Roman letters are a particularly difficult letterform and Lydia has rendered them beautifully. 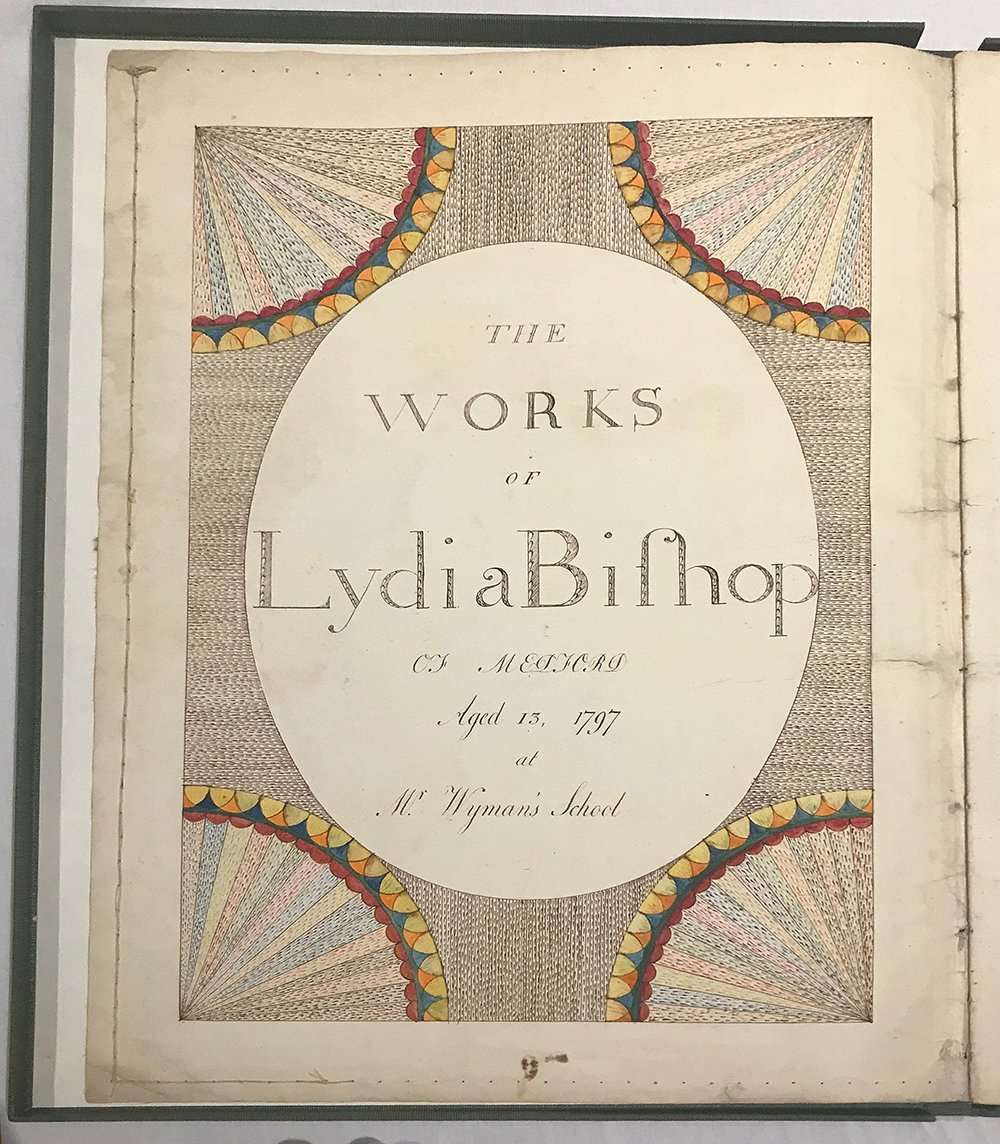 Indeed, the entire book is full of this lovely script and these gorgeous Roman letterforms, some of which have been creatively rendered with a slant to distinguish different section headings. In addition, many of the Roman letterforms have been decorated with patient, consistent, and creative hatching designs with the pen nib. Throughout the manuscript, different styles of lettering, slant, and size have been combined to consistently differentiate sections of the book, showing a fairly sophisticated level of design planning. The color decoration on the title page in the four corners is – I believe – watercolor. A close examination of the page reveals that the tiny decorations within the Roman lettering, as well as all the background decoration, were created by short pen strokes and dots (photo 2). 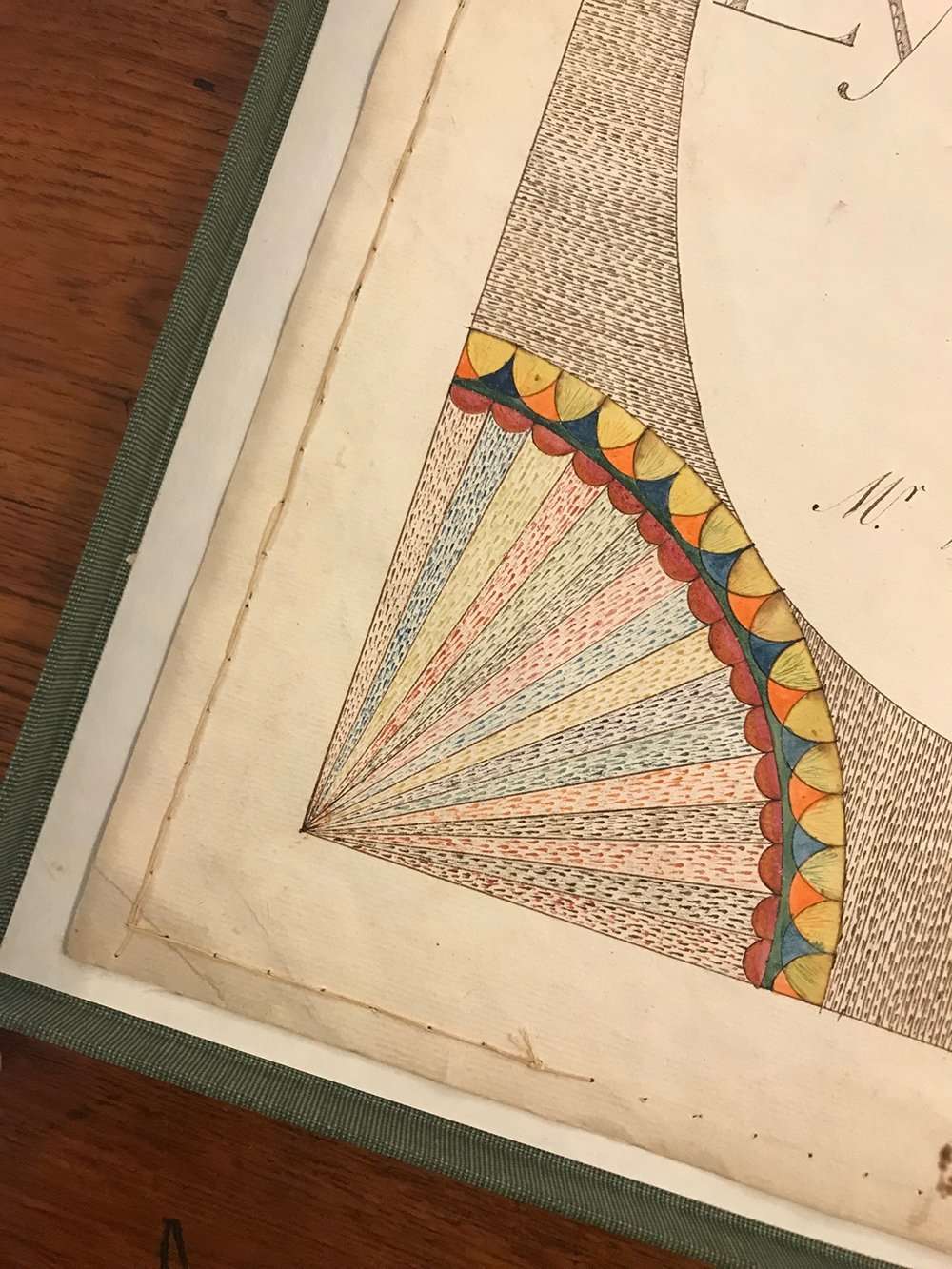 The cover, although faded, is of a heavy, decorated paper. There must have been a ribbon edging, because frayed remnants of ribbon are visible (photo 3).

The pages were bound together with delicate ribbon, still visible (photo 4) despite the recently added linen thread to shore-up the binding. 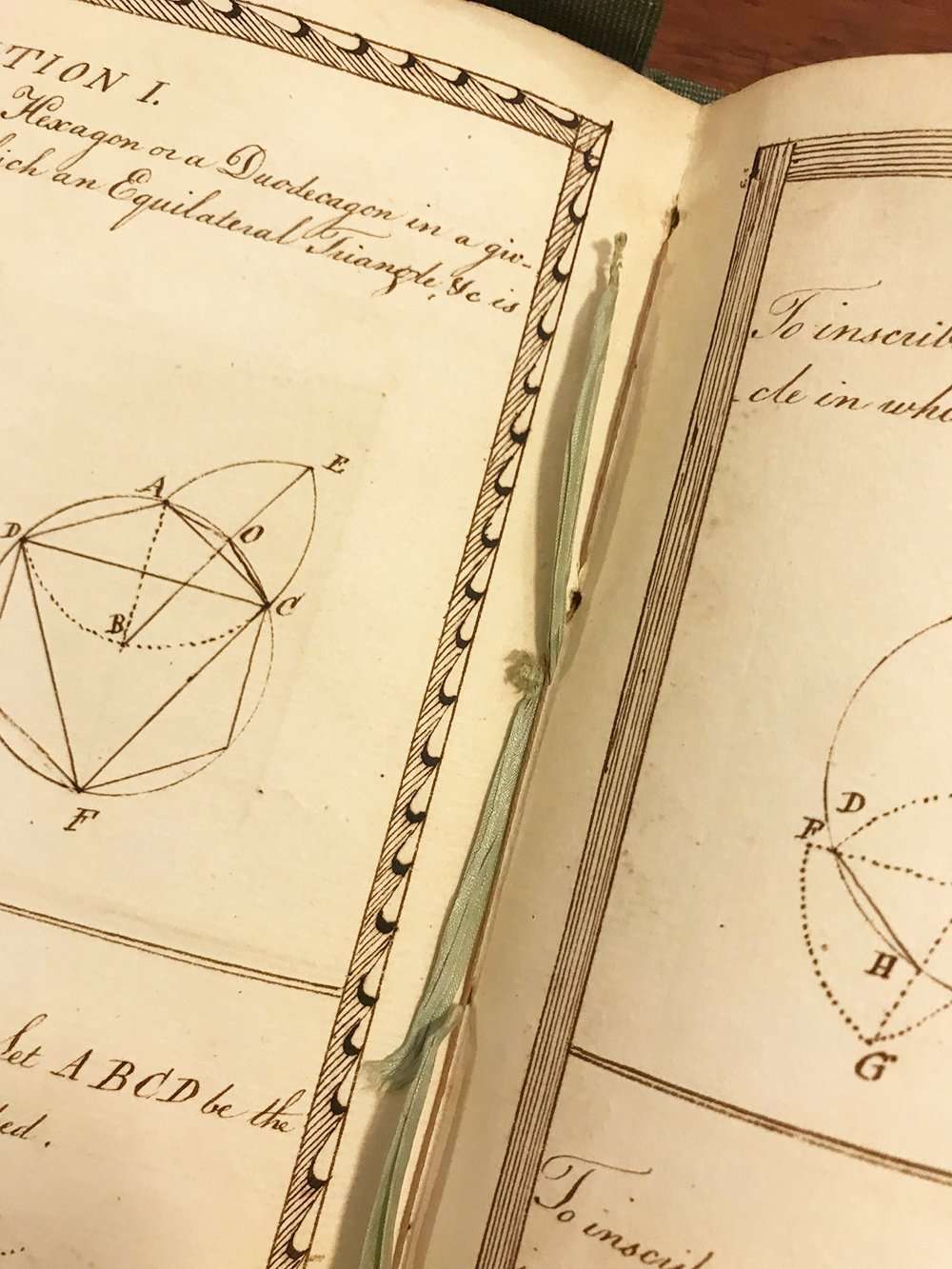 “Geometry is the science of Extension, and is employed in the Consideration of Lines, Surfaces, and Solids; as all Extension is distinguished into Length, Breadth, and Thickness” begins the first page of text. It continues, “The Science had its Rise among the Egyptians, who were in a manner compelled to invent it, to remedy the Confusion which generally happened in their Lands, from the Overflowing of the River Nyle . . . .“ Lydia then goes on to “Definitions” (photos 5 through 9) and proceeds to explain in text the meaning of “A Point,” “Lines,” “Angles,” “Superficies,” “Rectilinear Superficies,” “Triangles” and more. Each of the 12 definitions has an expertly rendered technical drawing, to give a visual component to the text explanations. 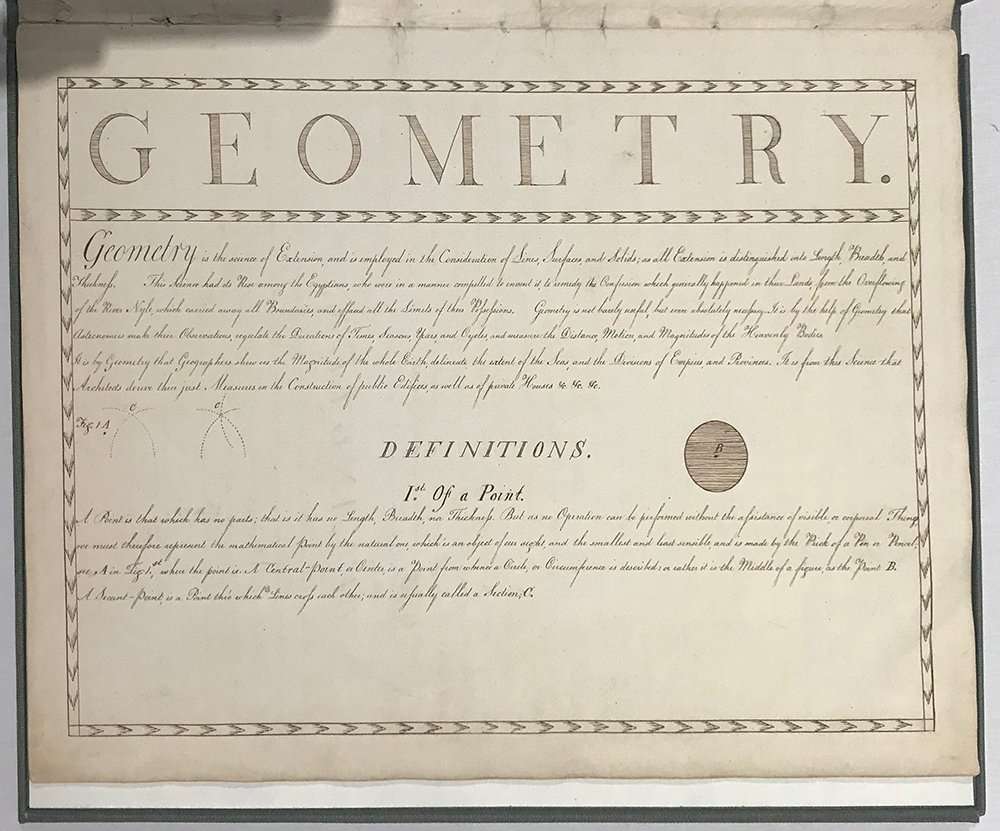 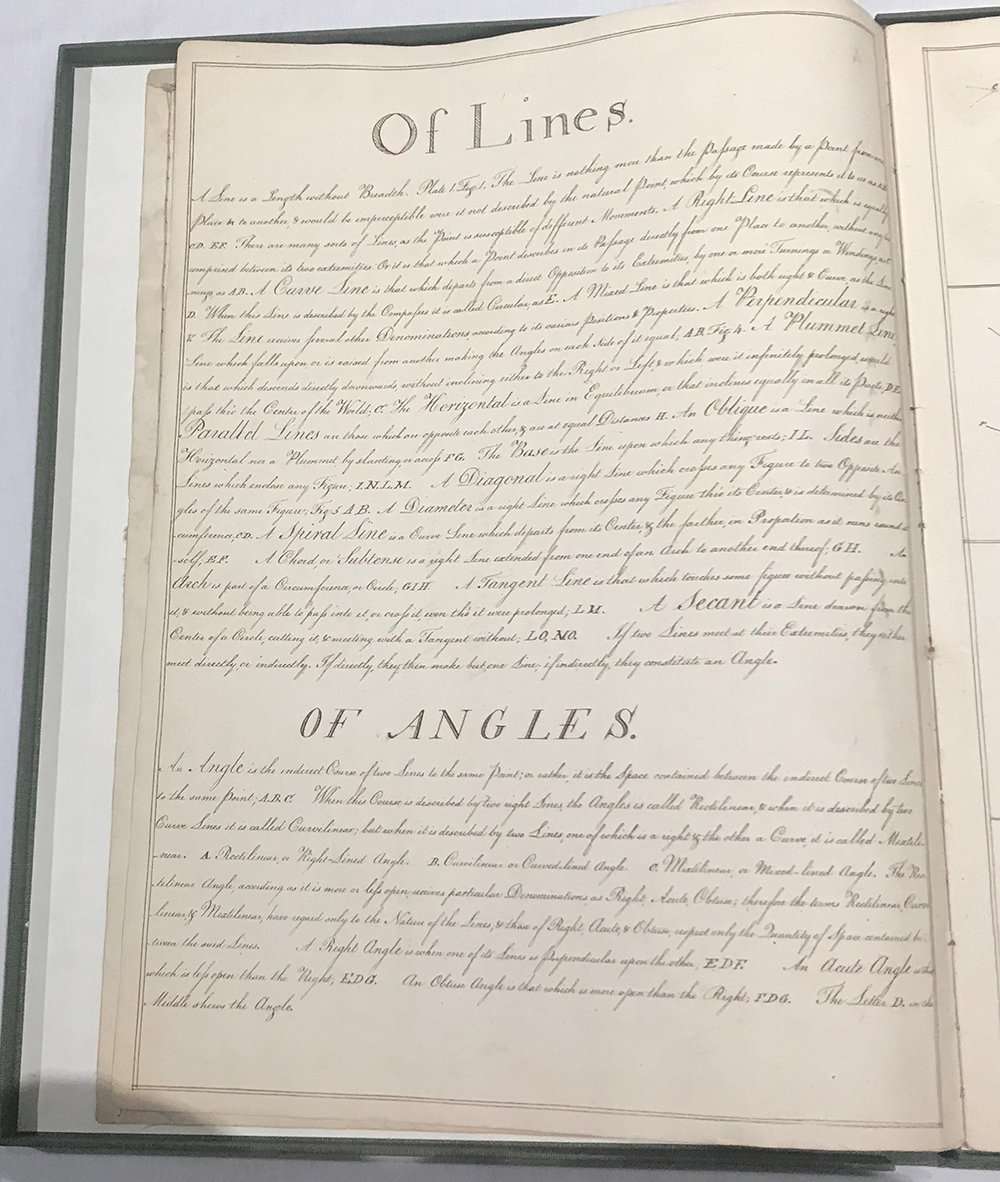 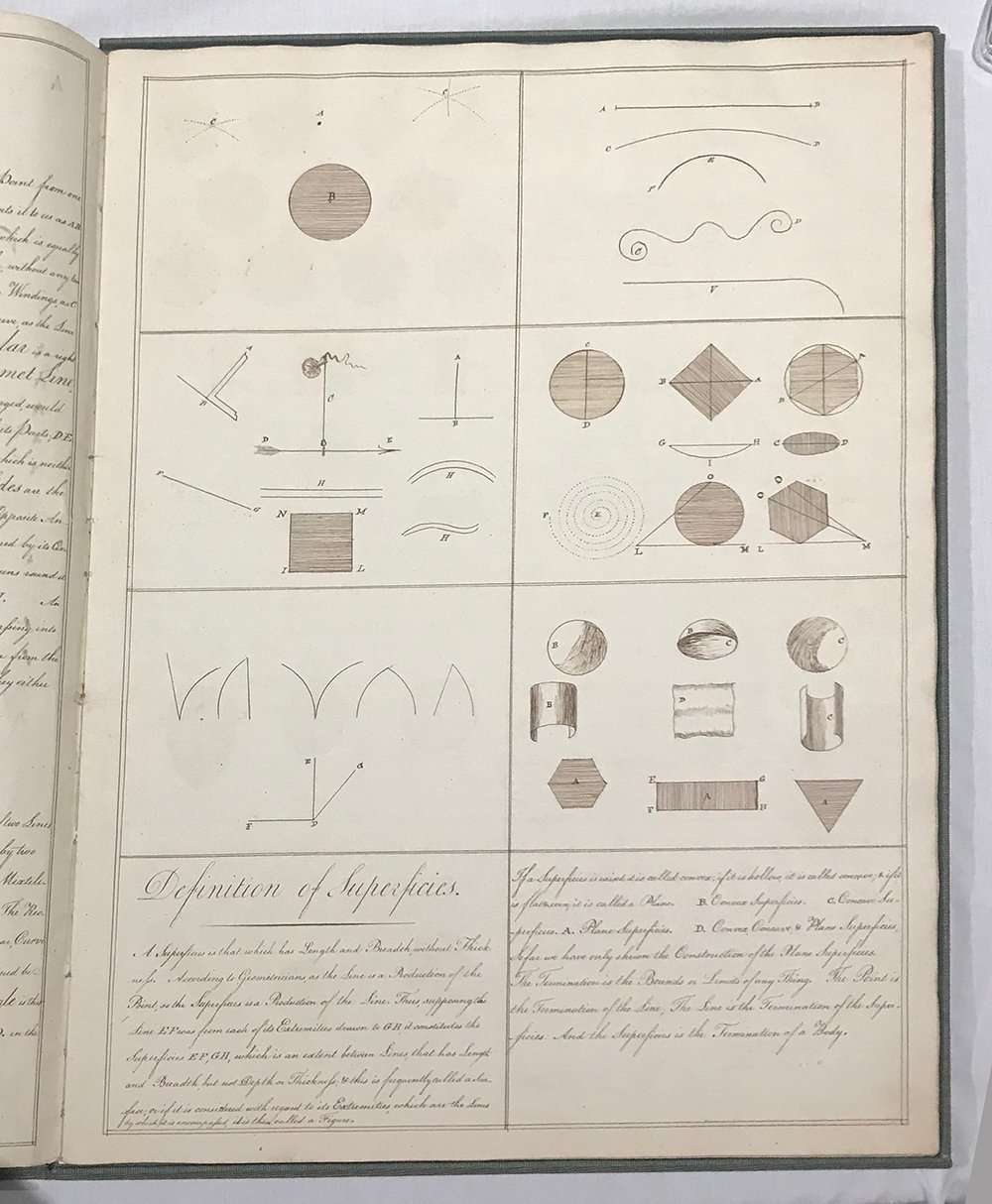 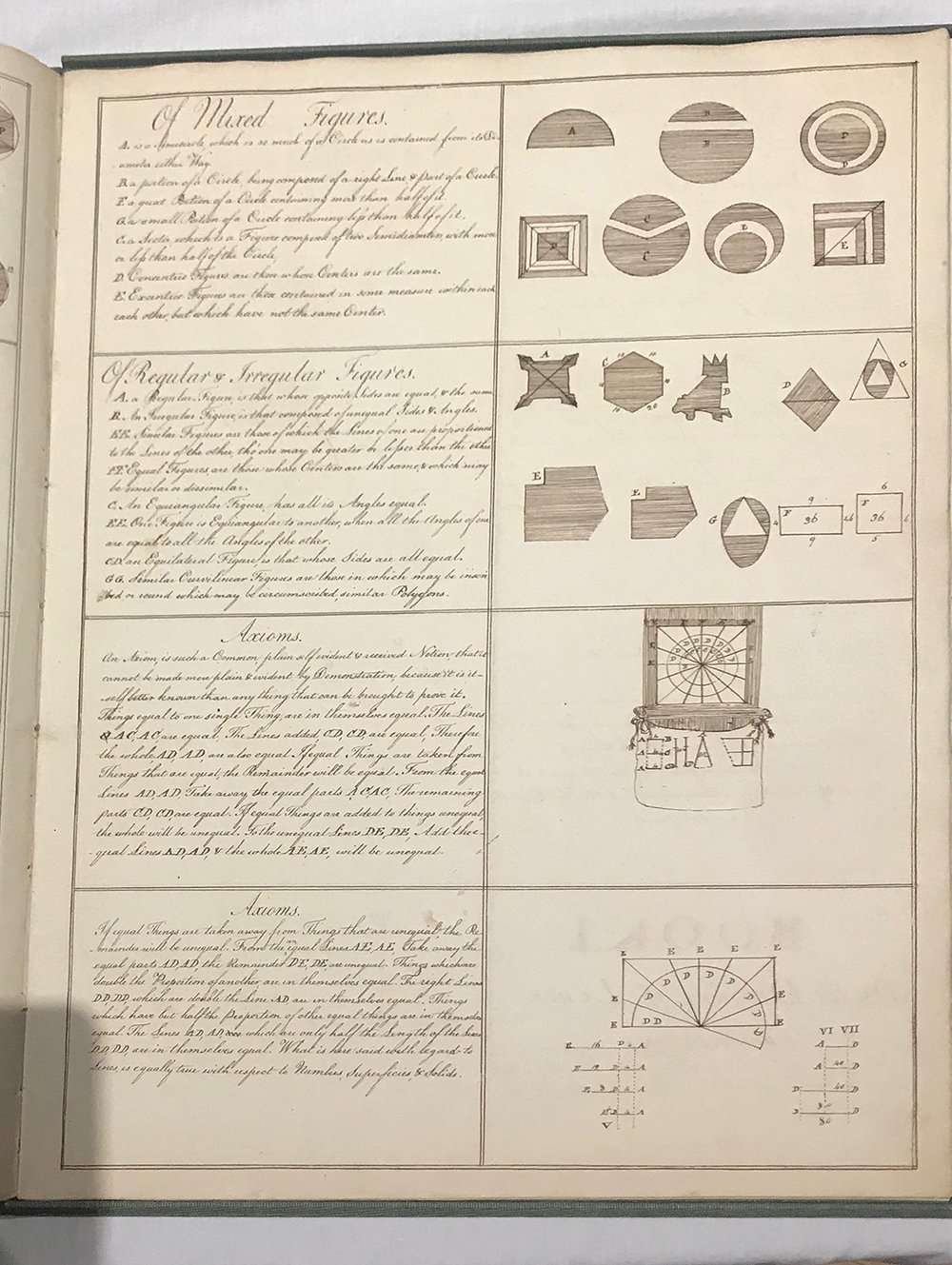 Lydia then moves on to instructions for the reader on how to use a compass, as well as an unnamed tool for drawing a perpendicular line (presumably something similar to a T-square), and hence how to draw specific geometric shapes and angles. She then moves on to a series of “Propositions” which challenge the reader to work through certain exercises to create various geometric shapes (photos 10 though 17). Pages 4 through 16 are divided into eight equal sections in two columns. Each page has a hand-drawn border of differing designs, some quite decorative, others simple line borders. (Check out the decorative borders in photos 16 and 17 in particular.) 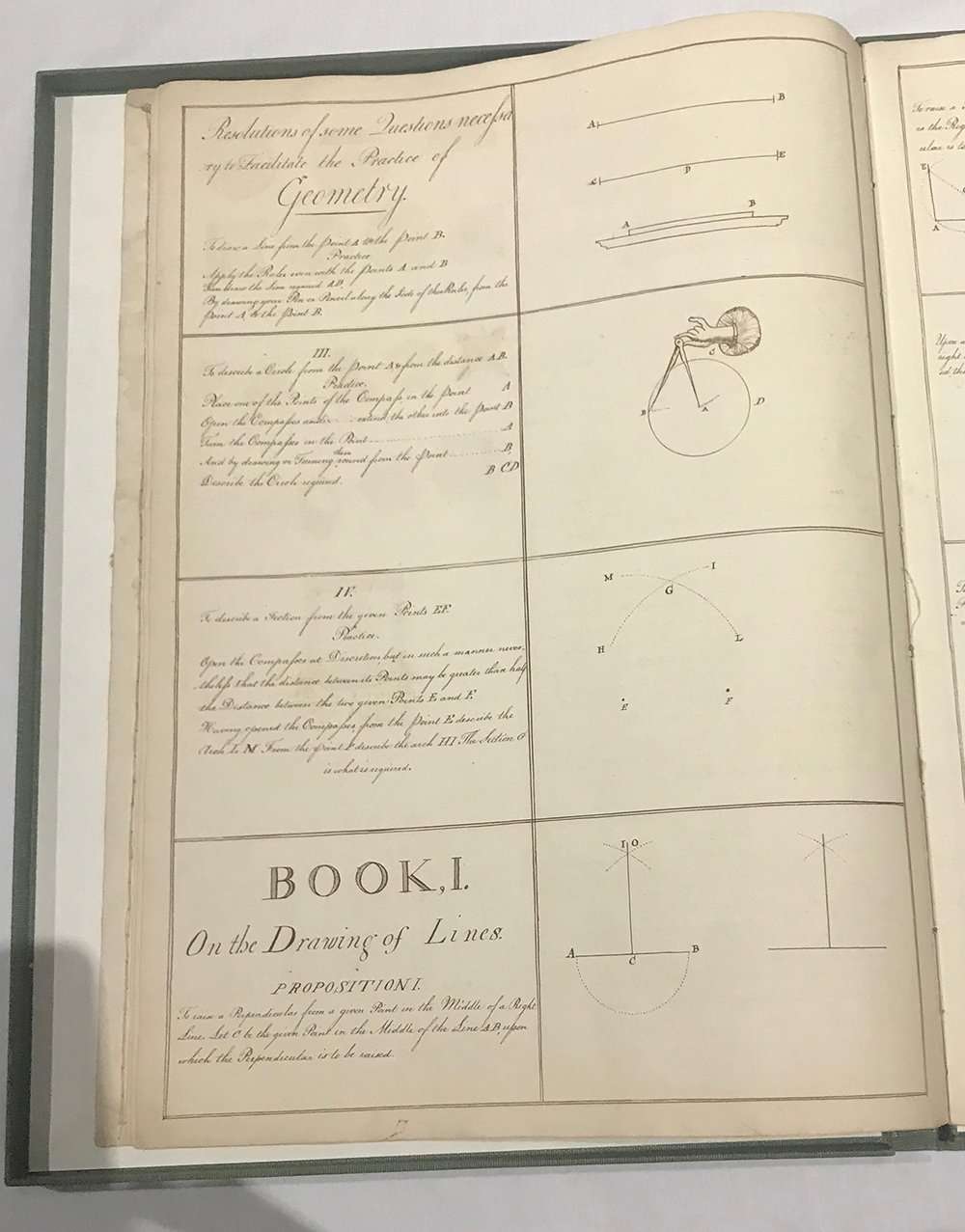 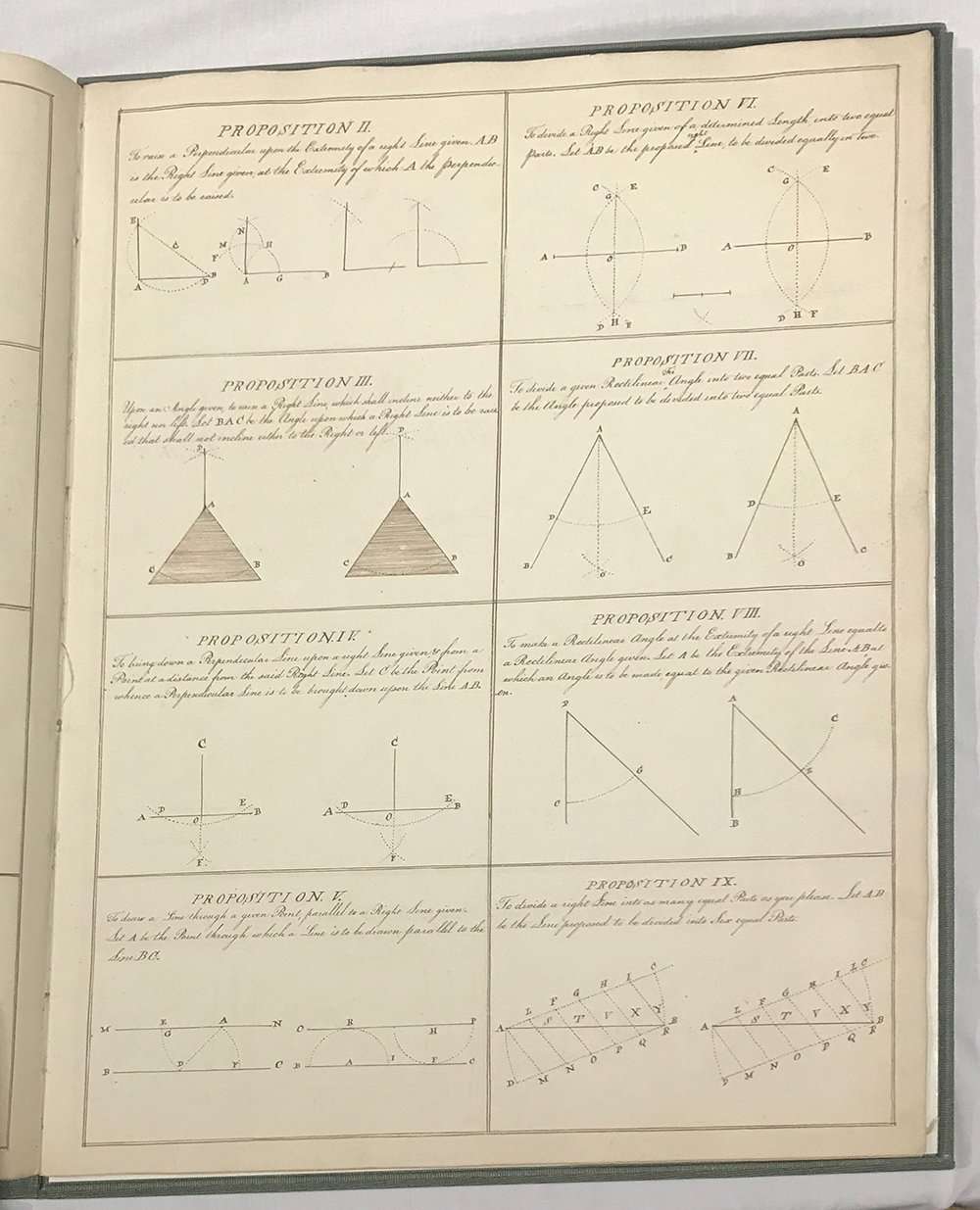 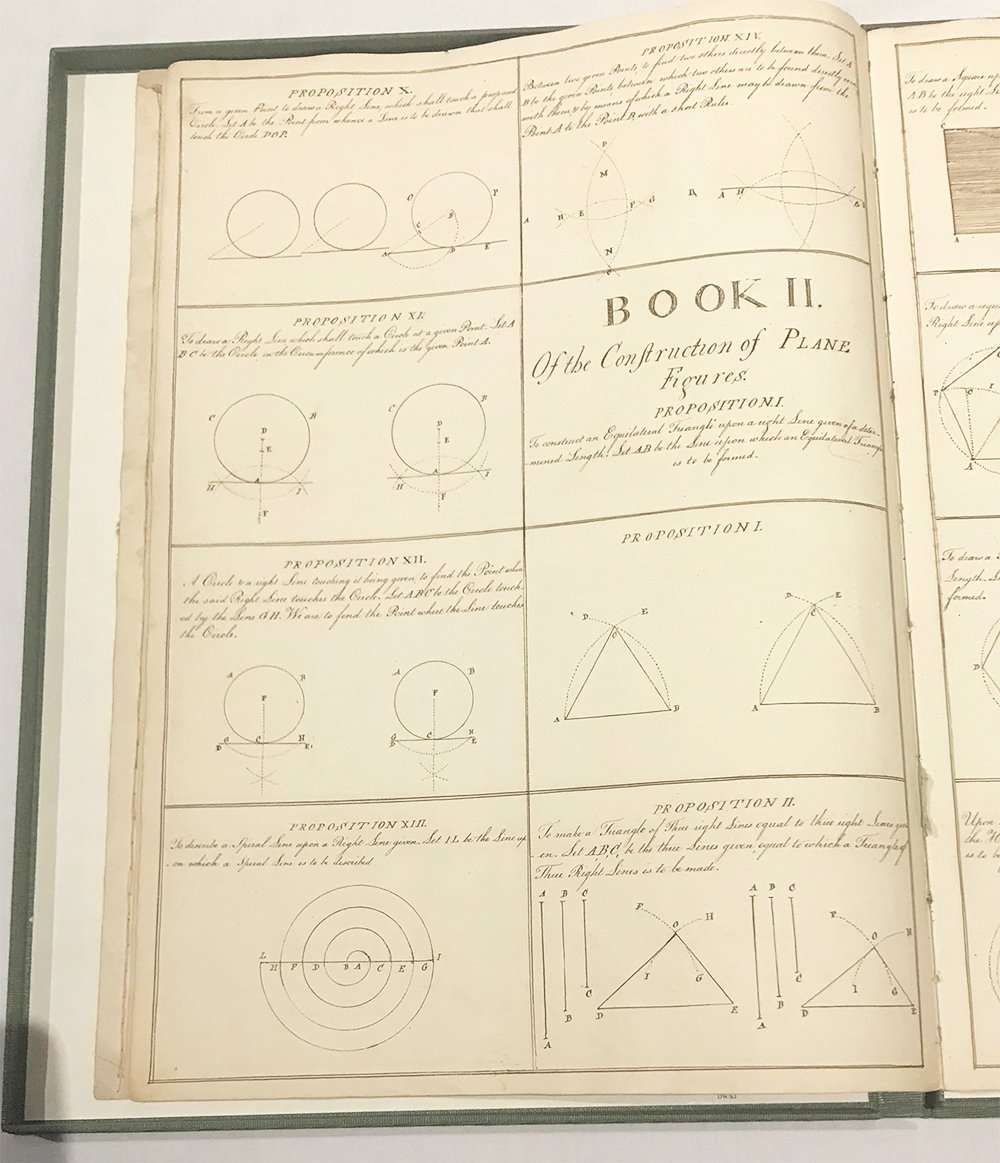 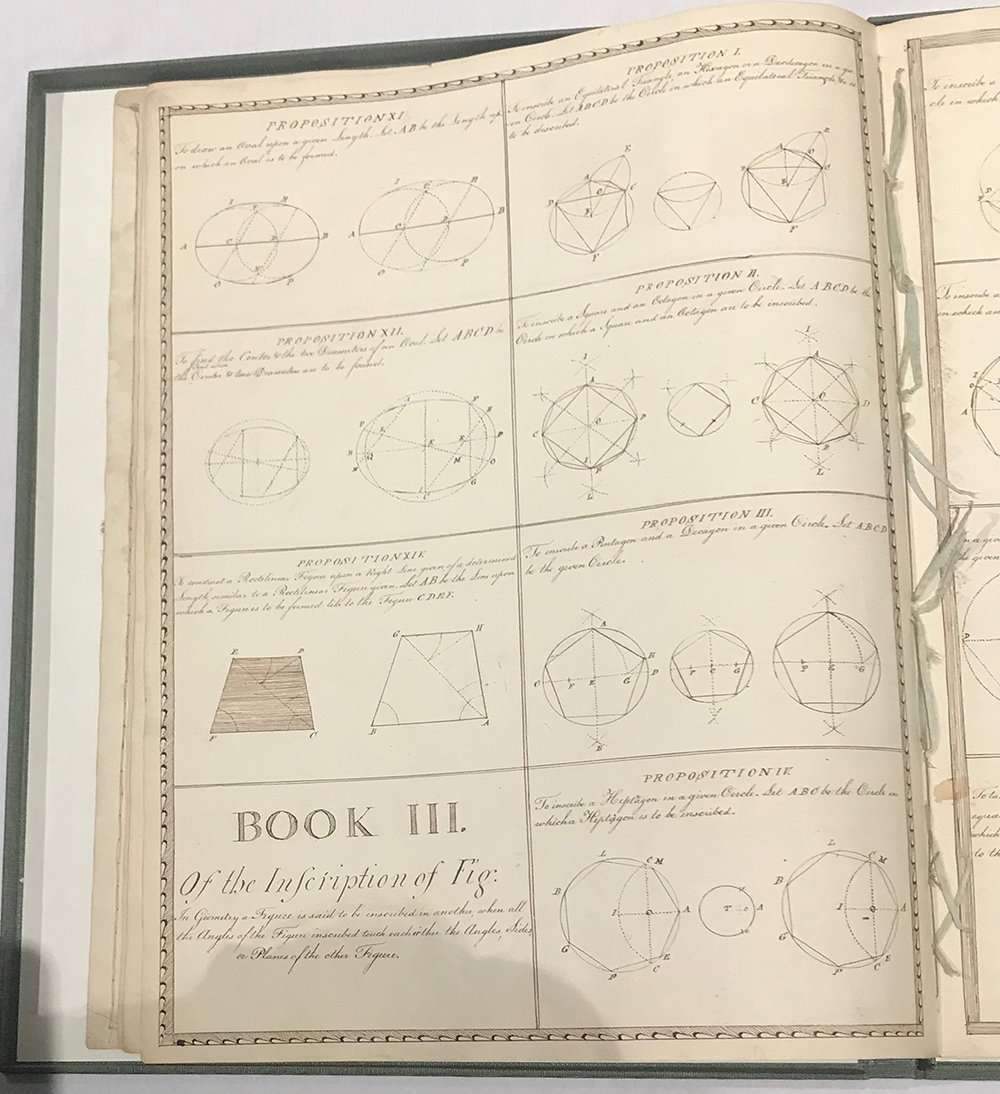 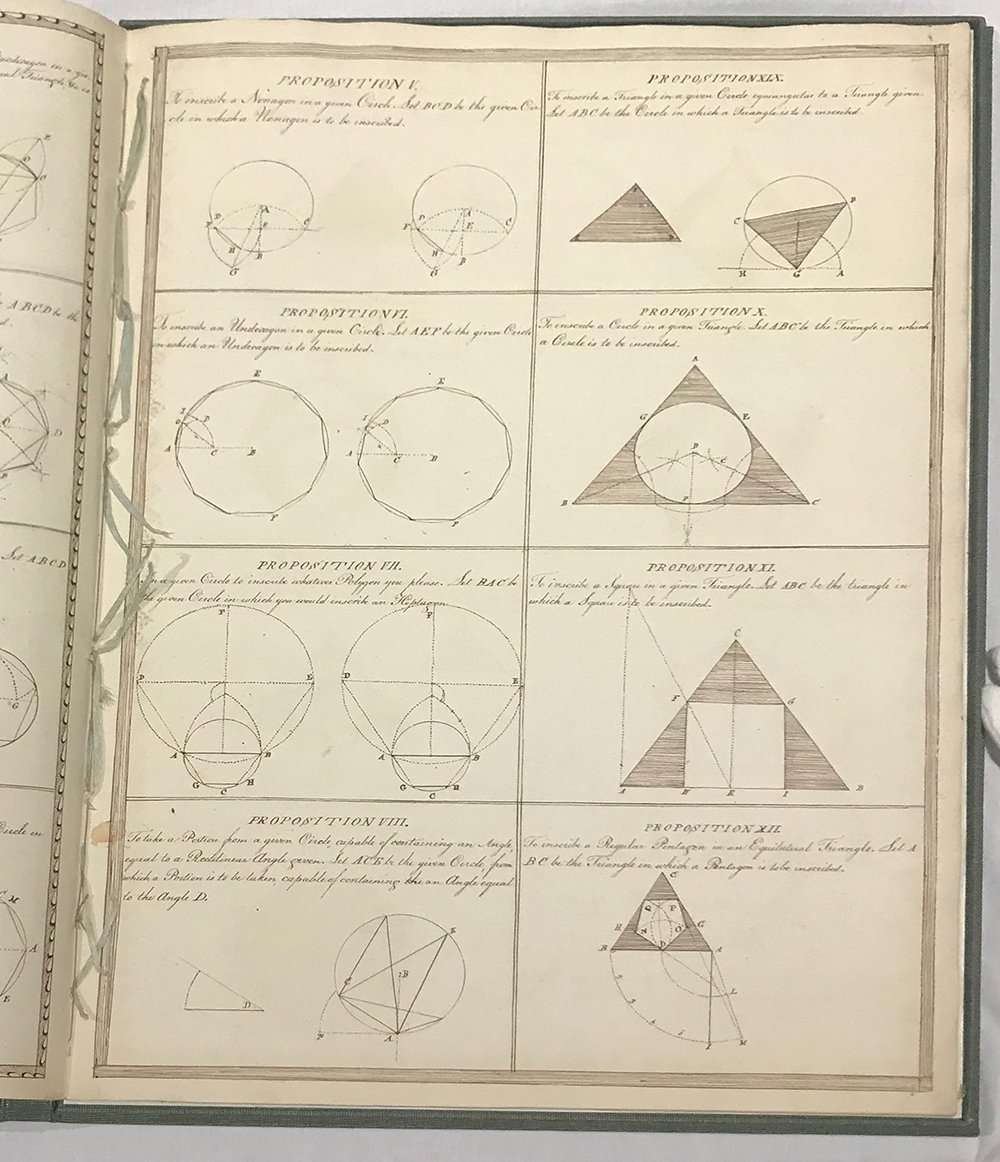 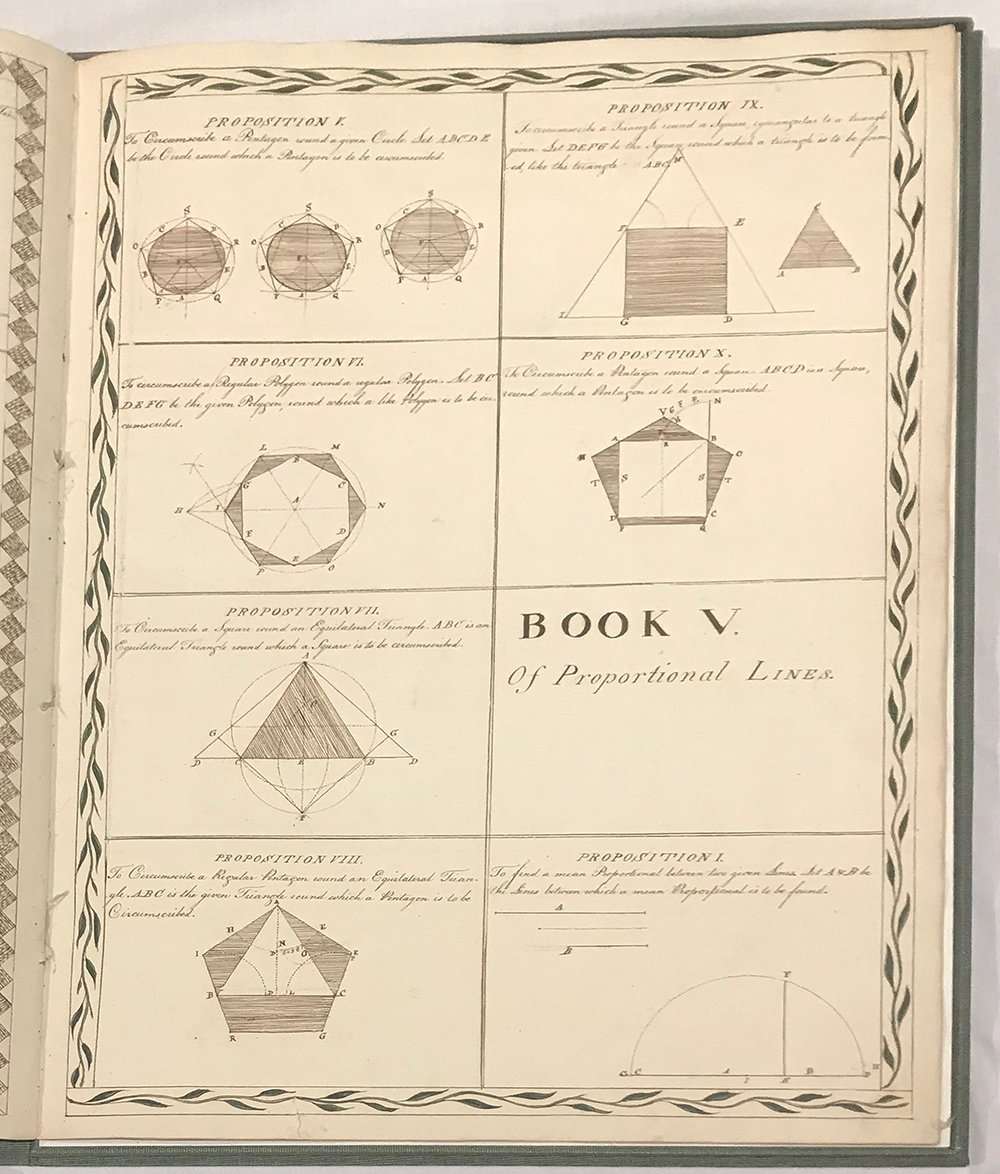 We know that the pages were divided prior to any lettering because there are a number of sections left blank (photo 18). Note the impressive level of craftsmanship in these borders in that straight lines are difficult to draw so precisely with a pen nib and ruler because of the risk of ink seepage under the ruler while drawing. 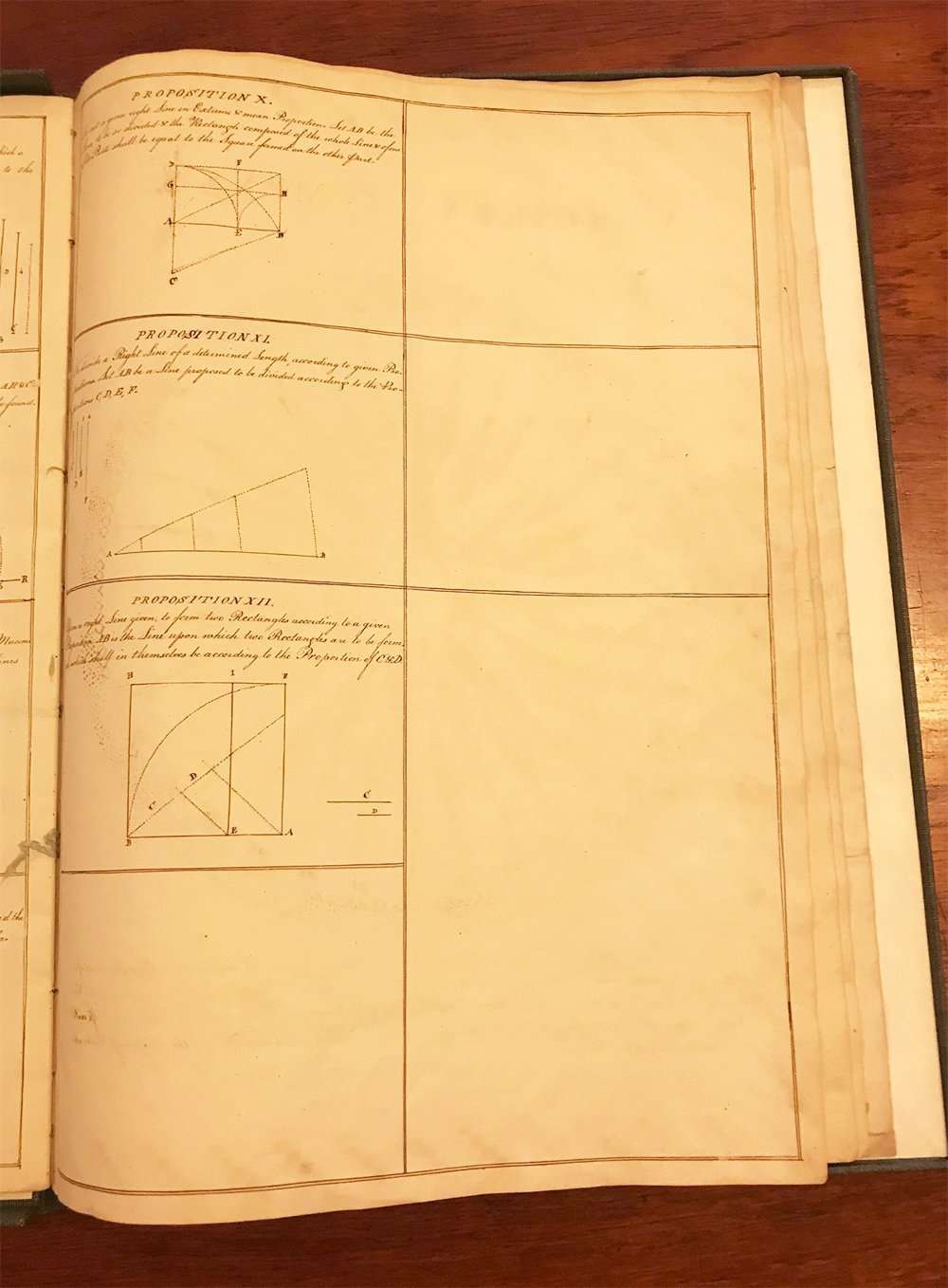 Once we reach page 17 (photo 19) we see Lydia’s handiwork in employing all the previous information to create a full-page Mariners Compass consisting of 32 points, with meticulously drawn angled lines, circles, triangles, rectangles, a complex and carefully crafted watercolor border, and a history of the Mariners Compass written out in her sumptuous script. 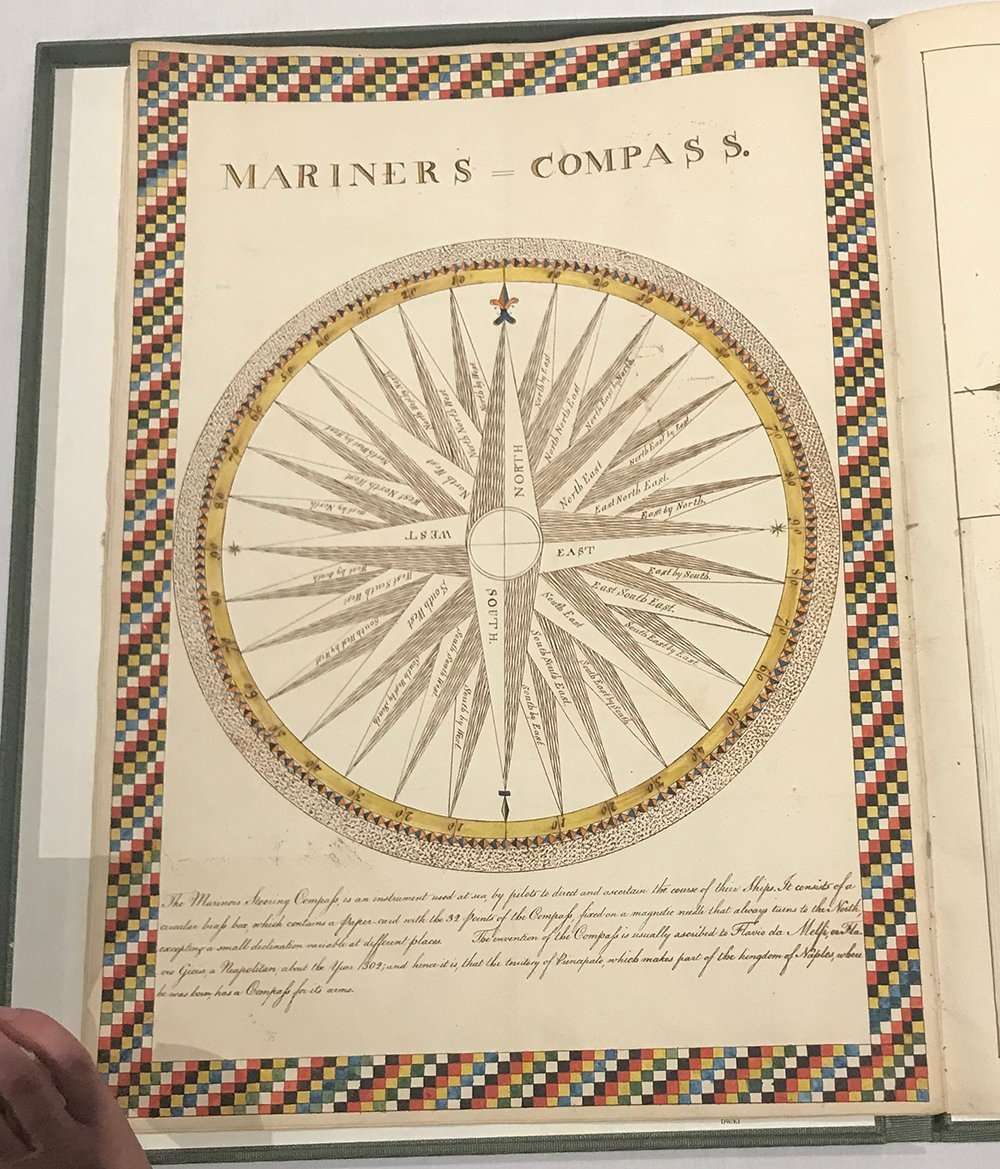 Lastly, there are two pages of the manuscript dedicated to paintings: botanicals and landscapes (photos 20 & 21) displaying a solid level of skill. 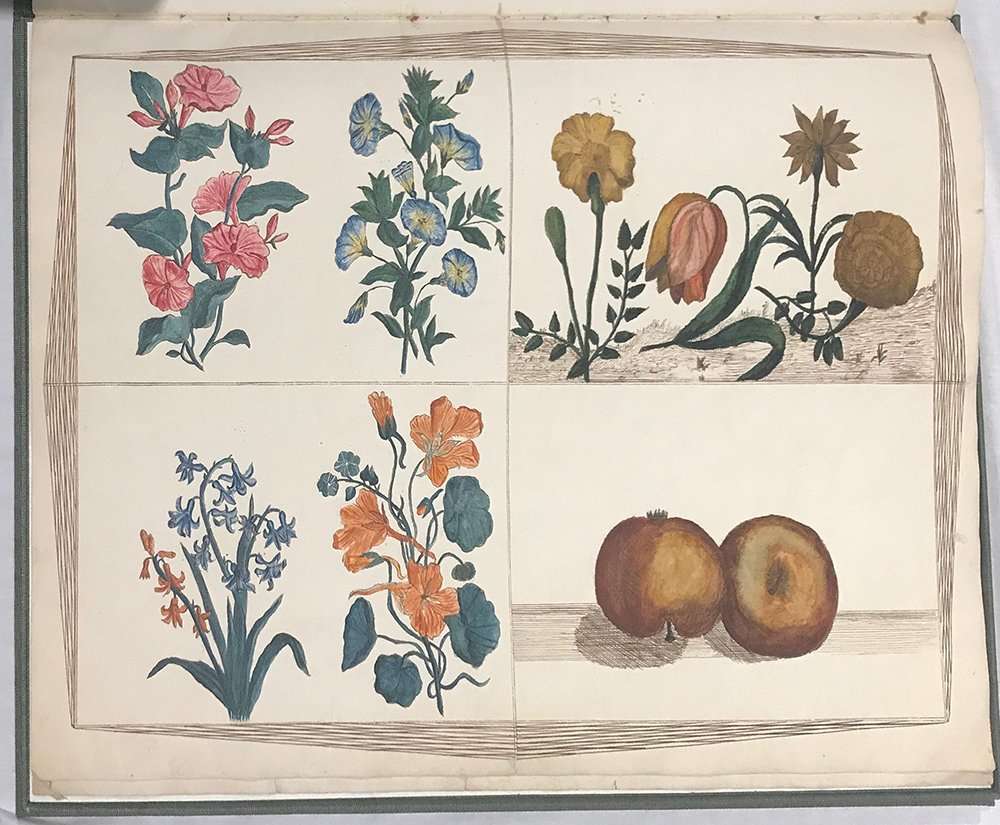 The final page in the document is a drawing of the planetary orbits (photo 22). 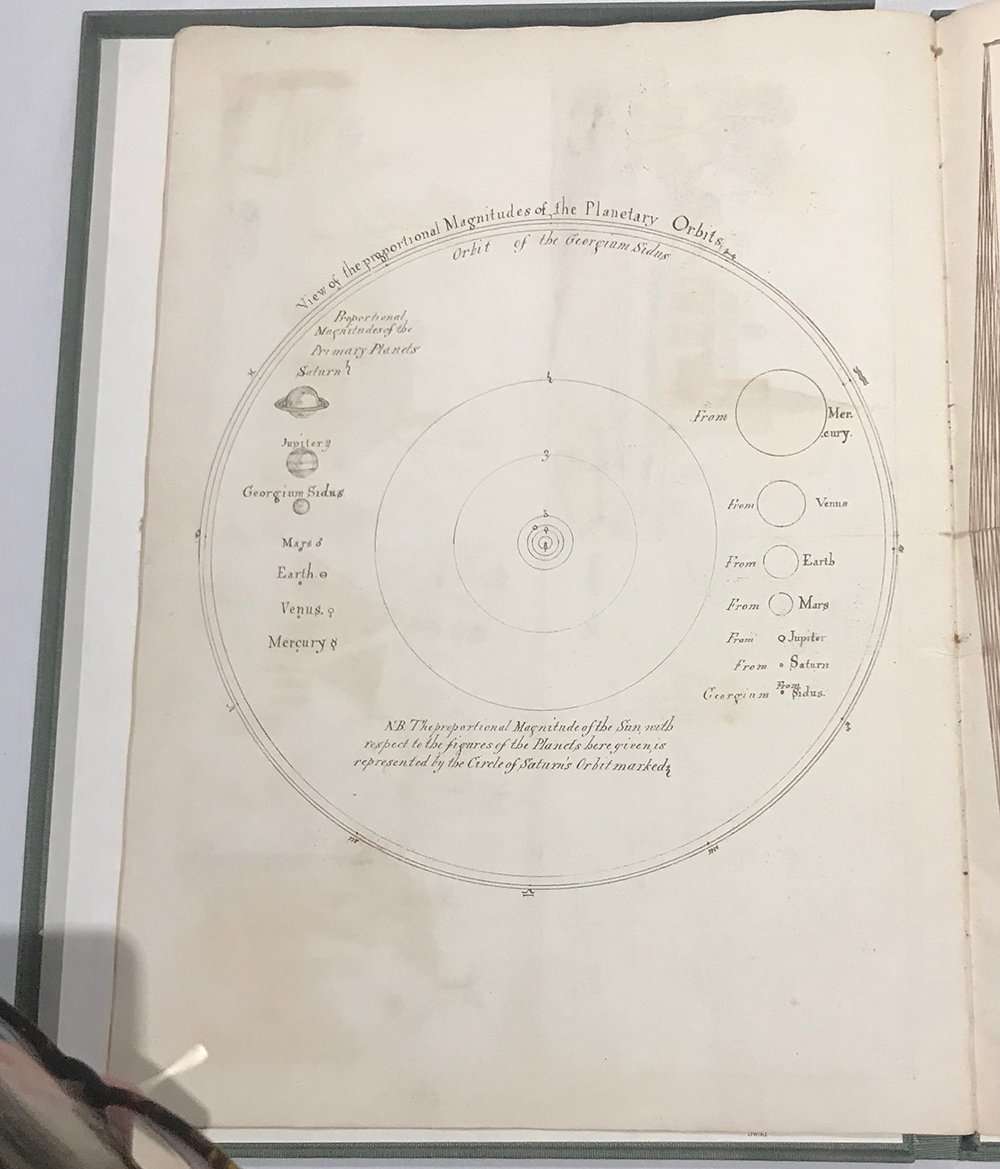 Never mind that it’s missing Neptune and calls Uranus “Georgium Sidus” – its original name (it was changed in the mid 1800s to conform with the other planets being named from classical mythology). It is a beautifully executed composition incorporating penmanship, technical drawing, scientific understanding, and skilled visual communication, all wrapped up in a solitary document that is a tribute to a surprisingly in-depth education from more than 200 years ago. In addition to the impressive level of understanding of the subject matter, this manuscript is a beautifully crafted work of art from a young girl who was barely a teenager! Author’s note: I would like to express my gratitude to both W. Donnison Hodges, Jr. and Julie Tarmy for sharing this treasure with me, and for allowing me to photograph and write about this remarkable manuscript.
← Prev: Old Documents and Bindings Next: A Different Kind of Lettering Project →