Once Upon a Time at Château de la Napoule 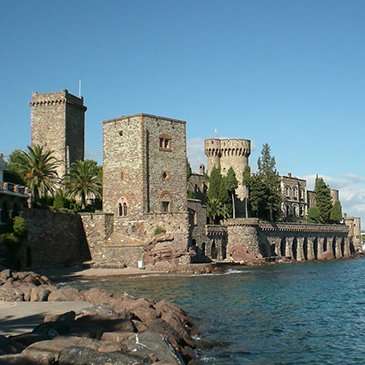 By Maryanne Grebenstein — The magic begins the moment the château comes into your view as you exit the small, charming train station directly across the street. 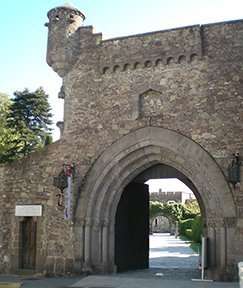 Street view of the entrance to the château.

Before you stands a fascinating château with an arched entryway hinting at the treasures beyond. 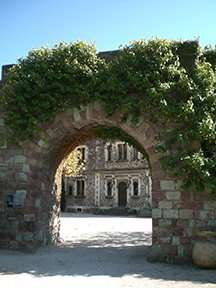 As you walk its beautiful grounds, you’ll discover one side of the château is perched directly on the Mediterranean. That’s it, you’re in love. This is the location of the classroom portion of The Abbey Studio’s 2016 “Classroom Abroad” excursion coming in October. Its beauty is so captivating it seems like a fairy tale. Now it becomes clear why owners Henry and Marie Clews had the phrase “Once Upon a Time” carved into the château’s stone entry. 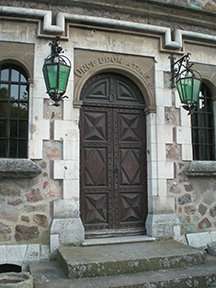 The words “Once Upon A Time” carved above the entry to the château.

Learning the history of this magnificent place only makes it more intriguing. Henry and Marie were Americans who had been raised within the wealthy society of Newport, Rhode Island. They moved to Paris after their marriage in 1914.

Henry and Marie on their wedding day, December 19, 1914 (photo from family archives).

Both had been married previously and they each had two children from their first, unhappy marriages. Henry longed to leave his Wall Street family history and pursue his passion as a sculptor and artist. The only child from their union, Mancha Madison Clews, was born in Paris and suffered a childhood fraught with frequent maladies (although ultimately he lived well into his eighties). Mancha’s ill health and the perils brought to Paris during World War I prompted Henry and Marie to consider abandoning their beautiful home on the Luxembourg Gardens in the heart of the city. Their desire to leave Paris for the fresh air and wholesome lifestyle of country living brought them to what was then a rather remote region in the south of France. The town of Mandelieu, where the château is located, is between Monaco and San Tropez on the French Riviera, and is today among the most desirable places to live and vacation. 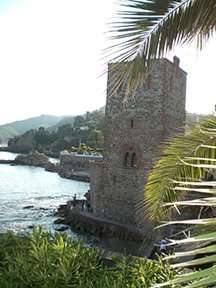 The château’s location – perched directly on the Mediterranean – explains its perfect location as a fortress.

Originally built as a 13th century fortress, it had fallen into disrepair over the centuries. Owned most recently by Daisy, princess of Pless, when Henry and Marie first laid eyes on the property in the spring of 1918, it was described by the house agent as “a broken down so-called château”(1) that had “been empty for years, nobody likes it, nobody wants it.”(2) 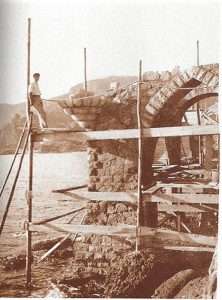 The building of towers and arched walkways where the château meets the Mediterranean (photo from family archives).

Henry and Marie spent the first summer as tenants at the château as a sort of trial to see how the country life would fit their young family. After returning to Paris for the winter, the Clews arranged to purchase the château and returned in June 1919 with the reconstruction of the château as their mission. The threats from World War I no longer existed but their love affair with La Napoule had begun. Their commitment to restoring the château was part of their remarkable life journey together. Marie, a skilled artist in her own right, served as chief designer for the architectural and landscape projects ahead of them, in collaboration with an architect, referred to only as Michelangelo. Many books of her drawings for La Napoule still exist. Directing the master-mason, Jean Cossano, and stone masons brought from Italy (the Italian border is roughly 50 miles from La Napoule) the long reconstruction began. 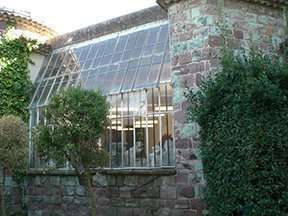 The exterior of Henry’s studio, showing the beautiful, light-welcoming windows.

In the early years, they settled into their uncomfortably dilapidated château where, as Marie described in her memoirs, “the drab ugliness of the ‘burgher’s dreamhouse’ was impossible to escape.”(3) 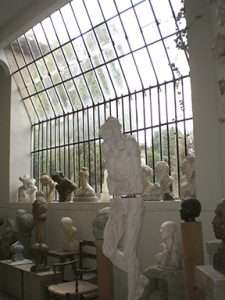 The interior of the studio today, with some of Henry’s sculptures.

As anyone who has lived through a major renovation of their home knows, it can be a very long time before the frustration, inconvenience, and anxiety inherent in such a project give way to comfort, satisfaction, and pride. This turning point was, for Henry and Marie, when the first major architectural project – the creation of a studio for Henry – was completed. Incorporating magnificent windows perfectly situated to receive daylight for the artist’s work, Henry returned to sculpting in earnest. He was a man who was prone to “melancholy” as it was described in that day. And it was clear that “his happiness and comfort were the basis of Marie’s existence.”(4) 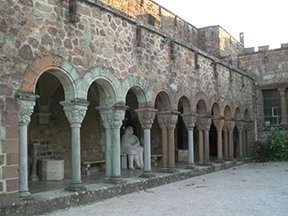 Columns topped with Henry’s sculptures of whimsical animals, a motif repeated often inside and on the grounds of the château.

It seems every inch of the château is covered with evidence of Henry’s existence and his inexhaustible artistic capabilities. His plethora of whimsical animals and decorative, logo-like monograms – incorporating a forward C, a backward C and an M and an H – are plentiful on the grounds. 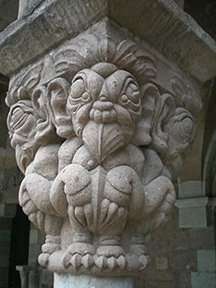 A detail of one of Henry’s column capitals.

The Clews family lived happily at La Napoule, despite Henry’s frequent bouts with depression, until his death in 1937. Marie built a tomb for Henry under one of the towers at La Napoule. 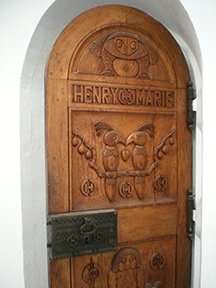 Door carved by Henry with whimsical birds and Henry and Marie’s names and monogram.

But the château’s story was far from over at the time of Henry’s death. Marie, ever-devoted to her husband and his artwork, continued her husband’s work by being a supporter of the arts and provider of hospitality. She made arrangements for Henry’s sculpture to be displayed at the Metropolitan Museum of Art in New York City in early 1939. 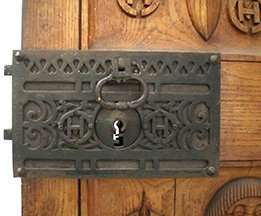 Even the door hardware has their monogram.

So impassioned was she to carry on his legacy that as World War II began she chose not to leave France and instead stayed to defend the château. She hid or buried all of his artwork and their valuables, fearing occupation by the Germans. Her premonitions proved accurate as the Germans built gun emplacements on the grounds of the château. 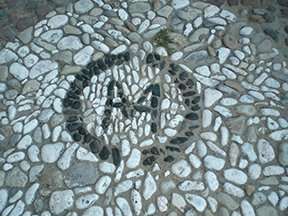 The stones in the various walkways around the château contain their monogram.

Marie was nearly successful in riding out the entire war at La Napoule, while tolerating (and sometimes having to host) the German officers. She did end up leaving the château and staying with friends for a short time just before the Allied troops arrived on the Mediterranean coast. She later described seeing the American flag visible on the battleships in the cove at the château as “the most wonderful sight of my life”(5) as reported in the Philadelphia Evening Bulletin. The war damage sustained at La Napoule was small when compared to the gargantuan project Henry and Marie had undertaken to restore the château originally. 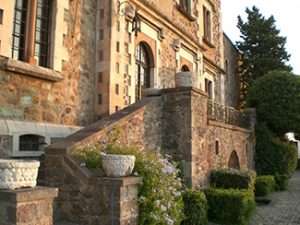 The château as seen from the Mediterranean side of the property.

Within a relatively short time Marie was back to the task of securing her husband’s legacy and devising a way for La Napoule to remain a memorial to her husband and a celebration of American art and culture. In 1950 with the aid of David Colton, a lawyer who became an avid supporter of Marie’s plans, La Napoule Art Foundation (www.lnaf.org) was created for the purposes of education and cultural enrichment. It thrives today with its mission of nurturing “artistic talent through residencies and community outreach, fostering the creative process as a catalyst to advance intercultural understanding.” 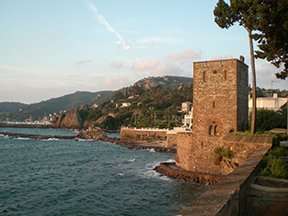 One of the towers of the château.

Marie, who in life was a woman of stunning beauty and imposing at nearly six feet in height, was buried a few feet from Henry after her death in 1959. Legend tells us that every 100 years they will “speak through the silence of the tomb.”(6) 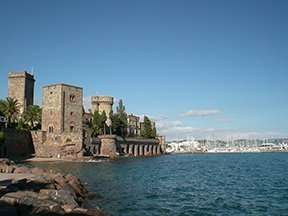 The château from the water and a marina in the distance.

“Are you there, Marie?” Henry will ask. And the answer will come: “I am here, Henry, close beside you.” 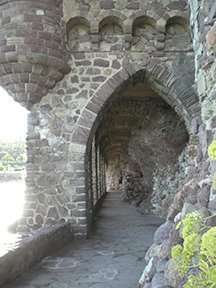 The stone wall that is shown under construction in previous photo.

If you are interested in participating in this year’s Classroom Abroad at La Napoule October 1 – 12 and experiencing the magic for yourself, please contact The Abbey Studio at info@theabbeystudio.com or 781-740-9000. For more information, download a packet describing the trip by clicking here.