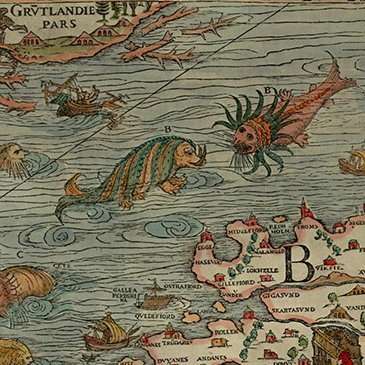 By Maryanne Grebenstein — While “Monsters Invade Medieval Maps!” seems like a headline you’d see in the media, there was, in fact, a period during the Middle Ages when cartographers unleashed their imaginations on maps, inviting all sorts of sea monsters into the portions representing the oceans. One of the many “happy accidents” resulting from my interest and research into illuminated manuscripts was stumbling upon images of medieval maps. These documents are fascinating from a calligraphic standpoint, of course, but even more so from an artistic, fantasy point of view, because of all the “monsters” they contain. These “map monsters” are fantastical creatures that often appear to be hybrids of multiple species, and are sometimes shown attacking ships. Supposedly the use of the term “here be dragons” to indicate uncharted and dangerous areas originated from this practice.

Close-up of a portion of the Carta Marina.

Even more interesting is that people of the time believed these drawings to be factual. They look humorous and even cute to our 21st-century eyes, but were very serious warnings at the time. Cartographers copied the sea monsters from illustrated encyclopedias, which were considered authoritative sources of information. Given that sea creatures were rarely seen, the people of that period believed whales and walruses were monsters, and speculated that unknown critters of all types lurked beneath the ocean’s surface. In addition, people envisioned that land animals had similar, larger counterparts in the sea. In effect, maps commemorated the expanding knowledge of distant geographies, as well as served as a warning about the untold dangers thereof. Sea creatures were usually imagined to be enormous; the ones drawn on maps were much larger in scale than the sailing ships themselves. I suppose it makes a certain amount of sense that when people encountered creatures such as lobsters caught by fishermen, it would have seemed logical that the massive, unknown ocean would correspondingly have yielded a massive version of the same creature, capable of crushing a human with just one claw. 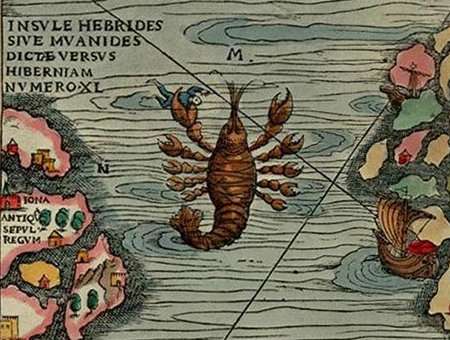 A lobster-type creature crushes a man with just one claw.

This makes me ponder just how profoundly brave the early explorers were. Let’s take a step back in history, though. Historically, the earliest known world maps date to about the 6th century BC. In the 2nd century AD, Claudius Ptolemy, a Greco-Roman mathematician and scientist, revolutionized map-making by developing principles still used widely today, including depicting latitude and longitude, and orienting maps so that north is at the top. The foundations of his maps were used into the Middle Ages, and as new information became available, cartographers continued to update his work. 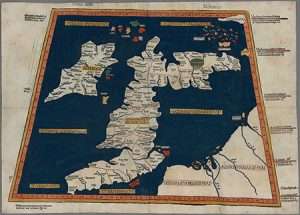 A map based on Ptolemy’s 2nd century specifications, with calligraphy.

Still, information at the time was limited. In particular, Ptolemy miscalculated the circumference of the earth, believing that Eurasia covered half of the globe, which helped influence Christopher Columbus to sail across the Atlantic to find a faster way to travel to India. (He, of course, bumped into the Americas on the way.) A Spanish cartographer, Juan de la Cosa, who traveled with Columbus, created the first known maps that included the Americas. Early maps fulfilled several purposes. In addition to navigation, maps were often used to illustrate different principles and to enable learning. During medieval times, world maps were called mappae mundi (in Medieval Latin, “maps of the world”). Approximately 1,100 mappae mundi survive from the Middle Ages, most of which were included as illustrations in manuscripts. (Read more here about the history of medieval manuscripts.) While most maps did not feature monsters, some did, basing them upon the sources of information available at the time. Then, as noted prior, in the second half of the 16th century, cartographers embellished upon scientific sources and conceived fanciful, fantastical creatures as a decorative element. We’ve included several images from a map called the Carta Marina (Latin for “map of the sea”), showing the Nordic countries as drawn by Olaus Magnus, a Swede living in Rome. The map took 12 years to complete (1527-1539) and was printed from nine woodcut blocks. It features a delightful collection of map monsters. 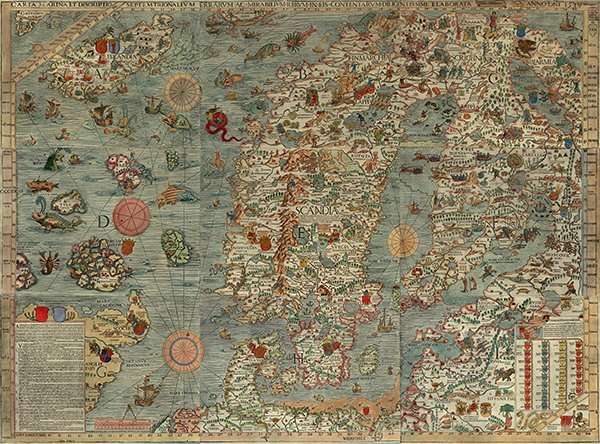 A Flemish cartographer, Abraham Ortelius, is credited with creating the first world atlas, the Theatrum Orbis Terrarum (“Theatre of the World”). See one of the images on this page from that atlas, called Islandia, (c. 1590), with its own collection of wonderful map monsters. 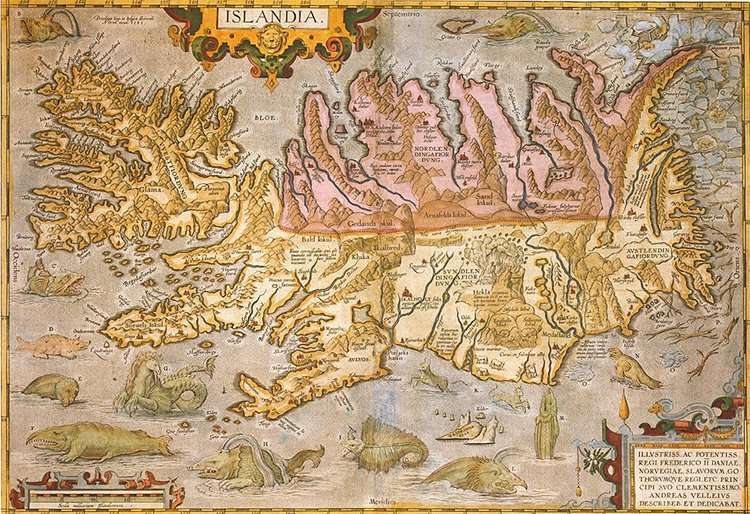 “Islandia” from the first world atlas by Abraham Ortelius, c. 1590.

Later on in the Renaissance, the hapless map monsters dove into the sea and exited maps altogether. Such a pity! In examining map monsters as a phenomenon, I presume it’s likely that several long-held traditions spawned their appearance and the belief that such creatures were real. The first would have been a legacy of ancient mythology in many cultures that included gods and fantastical creatures, including dragons and sea serpents. These evolved into early folklore and writings such as Homer’s Iliad and Odyssey, featuring an assortment of fantastic beings. Stories have been an integral part of society for thousands of years, and monsters would have inhabited tales of travel to distant lands, such as the story of sailors mistaking the back of an enormous creature for an island and landing “ashore” to light a fire to cook their food. The angered creature then plunged deep into the sea, dragging the sailors and their ship with it. 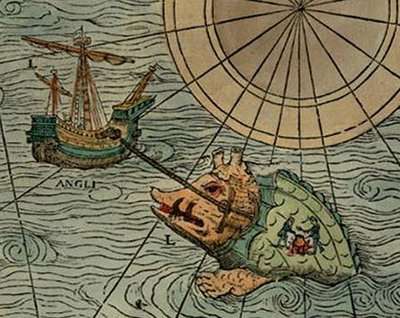 This image depicts the legend of sailors mistaking the back of a monster for an island.

Many people of the time believed that strange and malevolent creatures inhabited the parts of the world outside their own borders. An Old English manuscript from the 11th century, The Wonders of the East, describes monsters such as enormous dragons that hinder travel, giant ants, and hens capable of burning people. Cannibals and barbaric people are included as well, such as half-human, half-donkey creatures. In addition, religious fables such as Jonah and the Whale would have reinforced belief in the possibility of many types of creatures. Sea serpents are featured in religious beliefs of many cultures, including Sumerian iconography and the Babylonian creation myth. The Old Testament refers to the Leviathan, and “great creatures of the sea” are mentioned in the Book of Genesis. In the Middle Ages, the Leviathan was used as an image of Satan. Lastly, accounts of sea monsters have been found in virtually all cultures that have contact with the sea. Throughout history, people have claimed sightings of beasts; literally boat-loads of sailors have described them. In the 1980s, on two separate occasions, people reported seeing a sea monster off the shores of San Francisco, California. Stories of lake monsters, such as the Loch Ness monster, are common, too. 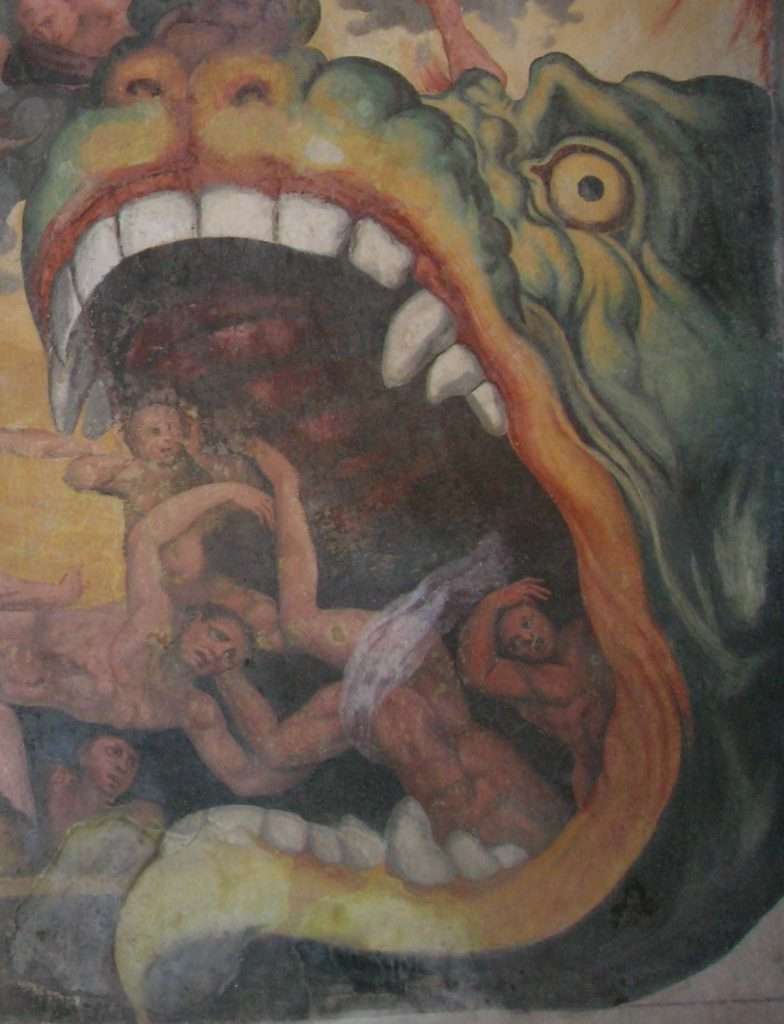 Skeptics state that reports of serpents are probably mistaken identifications of sea animals including whales, eels, basking sharks, and giant squid, as well as large fish such as sturgeon and oarfish, or matter such as driftwood or seaweed. Many carcasses have washed up on shores that look like freakish monsters, and while some have been analyzed to be decomposing whales, not all have corresponded to known species. Some people believe species of prehistoric animals have survived, or that specimens could be mutants, or even extraterrestrials. In recent times, ready access to photography and video equipment has enabled the internet to host thousands of images of suspected monsters. (You can spend a lot of time watching videos on YouTube!) Technology keeps things very entertaining too, sometimes enabling seemingly realistic images of monsters that have been created with special effects such as those found in the cinema, or rendered with Photoshop. Then again, who is to say that “sea monsters” do not actually exist? Given that only about 5 percent of the Earth’s oceans have been explored, the potential for many unidentified species is high. Scientists exploring the deep seas are capturing video footage of many varieties of interesting plants and animals never seen before. It’s just one of the fabulous things about our wonderful planet: new species are being discovered every day. According to an article in Smithsonian Magazine, “Scientists estimate the total number of plant and animal species in the world at 10 million to 50 million – but they have so far described only about 1.9 million.” One day we may discover explicit proof that these monsters were factual creatures after all, and may just see them populating our maps once again.

You can get in on the fun on Twitter and Instagram using hashtag #mapmonstermonday, where several map libraries are regularly posting images of map monsters on, well, Mondays. View a zoom-able image of the Carta Marina by Olaus Magnus. View a (very large) clickable image of Islandia from the Theatrum Orbis Terrarum by Abraham Ortelius. View delightful contemporary sculptures of map monsters by Bailey Henderson. Check out a recent book on the topic, Sea Monsters on Medieval and Renaissance Maps by Chet Van Duzer. View this great YouTube video of a marine iguana. (Looks like a real-life version of a map monster!)
← Prev: Illuminating the Future: A Museum Guide Next: Happy Mother's Day, Christine →