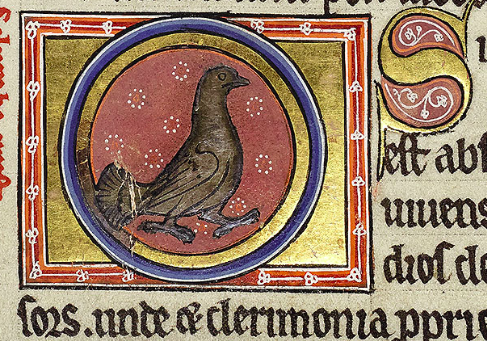 Many of you know that bestiaries are medieval books about beasts. They contain beautiful paintings and elaborate descriptions of natural items – primarily animals, but they can also include fish, rocks, and fantastic beasts. Some of the creatures depicted didn’t actually exist (although medievals believed they existed). Even when they did exist, often the representation of a particular creature is altogether different from what it looks like in real life. For example, look at how a chameleon is represented in MS 764 from the Bodleian Library at Oxford, UK. It looks more like a horse than the lizard that it is:

Have you ever heard of an eale? According to medieval bestiaries, they existed. Here is how the creature is described in MS Bodley 764 (translation by Richard Barber): “There is a beast called an eale, as large as a horse, with an elephant’s tail; it is black in colour and has the tusks of a wild boar as well as exceptionally long horns which are adapted to every kind of movement. For they are not rigid but can be moved as needed when it fights. It puts one out in front in a combat, so that if it loses its tip from a blow it can bring the other one forward.” And here is a painting of an eale:

How about this interesting fellow called a manticore (don’t you love his medieval hat?):

He is described in this way: “In India there is a beast called the manticore. It has a triple row of teeth, the face of a man, and grey eyes; it is blood-red in colour and has a lion’s body, a pointed tail with a sting like that of a scorpion, and a hissing voice. It delights in eating human flesh. Its feet are very powerful and it can jump so well that neither the largest of ditches nor the broadest of obstacles can keep it in.” Note: don’t miss the human foot hanging out of his mouth, no doubt the remains of his favorite meal!

Bestiaries are fascinating documents – sometimes funny (not that they were intended to be funny!), sometimes instructional, and even a little raunchy from time to time. In their day, bestiaries were taken quite seriously because they were meant to educate and warn readers about the dangers of certain creatures. And perhaps just as important, the animal behaviors were used to draw parallels to human ways and to demonstrate the importance of good moral conduct as well as the consequences of unchaste behavior.

There are two things in particular that make bestiary painting among my favorite things to paint. First, it can’t be done “wrong” because what you are drawing is likely the result of someone’s imagination, based on stories that had been told. You can’t draw an eale incorrectly because there is no such thing!

And second, the scribes who created the bestiaries (and lots of other manuscripts) were copyists – their job was to recreate the same image as had been painted previously in another bestiary. They developed some very interesting techniques to do that. One way would be to punch a series of small holes in the “model” image they were using as a source. They would then lay the model image on top of the vellum for their bestiary and they would dust powdered Armenian bole (red powdery clay) over the original. (This technique is somewhat similar to what we might call stenciling today.) When they lifted the original, a dotted image duplicating the original was left on their vellum. Another way they copied an image was to cover the back of the source image with powdered bole and transfer the image by tracing over the original while it was positioned on their vellum. This second technique is the one we’re going to use for the purposes of this blog, although we will use graphite from a soft drawing pencil rather than Armenian bole.

In this blog, I’ll demonstrate how to create a small book containing an excerpt from a bestiary about the panther. Here is the MS 764 bestiary’s description of a panther: “There is an animal called the panther, which is brightly coloured, very beautiful and tame. Natural historians say that his only enemy is the dragon. When he has eaten and is full, he hides in his lair and sleeps. After three days he rouses himself from sleep, and lets forth a great roar; and out of his mouth comes a very sweet smell that seems to contain every kind of scent. When the other animals hear his voice they gather from far and near, and follow him wherever he goes on account of the sweetness of his breath. Only the dragon, hearing his voice, hides in terror in the bowels of the earth. There it lies in a daze, because it cannot bear the sweet smell, and remains motionless, as if it were dead. The other animals follow the panther wherever he goes.”

This is the image of the panther that I will transfer. Like the images and text mentioned earlier, it is from MS 764 Bodley at the Bodleian Library:

Notice the panther’s multiple colors and spots, the breath coming from his mouth, the other animals – so attentive to the panther – and the dragon in the “bowels of the earth” in the lower right corner.

Thanks to today’s technology, I was able to do some important research into bestiaries. One of my favorite finds was a lovely site for the Aberdeen Bestiary (https://www.abdn.ac.uk/bestiary/) with incredible images, descriptions, and both the Latin and translated text. Typical of many documents created during the Middle Ages, the lettering is very heavy, large, and blunt. Here is a sample from the Aberdeen Bestiary that gives a sense of the lettering style and its size in relation to the small drawings:

To give you a sense of scale, the Aberdeen Bestiary has folios that measure approximately 7-1/2”w x 12” h. Although the illustrations are not uniform in size, they are similar in size. I estimate the illustrations to be generally about 4” w x 3-1/2” h.

I loved the heavy look of the lettering and wanted to try to imitate it in my little book; usually, much of the work I do is rendered in a more delicate hand with a much smaller x-height than might have been used in the middle ages. So I spent some time practicing and finally came up with these letterforms, which I decided to use as my model:

You can see I made a few changes as I worked down the page and through the alphabet. My favorite letters are the ‘g,’ ‘p’ and ‘z.’ For the ‘p’ I incorporated a crossbar. In the middle ages, the crossbar on the descender of the ‘p’ indicated an abbreviation – a few letters left out of a commonly used word to save the scribe a little work. However, I didn’t use it as an abbreviation; I just thought it was a very beautiful letter with the crossbar added. (A little artistic license on my part!)

Once I made my selections for the text, image, and lettering style, I needed to establish the layout. I decided to do an accordion book for my little panther excerpt. The horizontal format of the image to be used helped inform the orientation and approximate size of the book. I settled on a book that would be about 6-3/4” w x 4-3/4” h. Knowing this size, I was then able to determine the text/image size available to me by using the golden rule process (also known as “golden mean,” “golden proportion,” and other names). (Please refer to one of my prior blog posts: Golden Rule for Book Design).

In the process of creating a book such as this, the text is lettered before any decoration is done (which sometimes surprises people to know).

In my book, I chose to incorporate the medieval tradition of no punctuation. Instead I used – as a medieval scribe would have – large, decorated letters (called Versal capitals; so named because they begin a new verse, paragraph or sentence). Here are a few photos of the text area:

Once the text was lettered, the next step was to create line art for the image. I knew that my image could be no larger than the 4-1/2” w x 3” h image/text area previously determined. I drew the line art on heavyweight, high-quality tracing paper (also known as drafting vellum or tracing vellum) so that I could easily transfer the design to my good paper that I would use for my book (which already contained the hand-lettered text):

I then turned the line art over and filled the back side of the tracing paper with graphite using a soft drawing pencil:

I then positioned the line art – graphite side down – on the page where I wanted the image to appear and traced over the line art with a mechanical pencil:

My line art transferred onto the good paper:

Note to the purists who might be reading: If some of you are feeling like transferring art is cheating because you are not creating your own original artwork in the bestiary, fear not! This is exactly the technique that a medieval scribe would have used. As I described in the beginning of this blog, these techniques were actually developed during the Middle Ages for this exact purpose. Remember, they were copyists! Theirs was not the domain of creating fine original art.

Once the transfer was done, I simply went over my graphite lines with ink using a crow-quill pen:

Once the inking was complete, I erased the pencil lines and my image was ready for the laying of gold and color.

Historically, these miniature paintings would have been created by working from dark colors to light colors. This is in contrast to the way most painters work today, but I used the medieval process for my little panther painting. Before applying any color, though, the gold was applied onto the line art. If I had been using gold leaf (in a process called Gilding), I would first have applied several coats of gesso, followed by the gold leaf. (Please watch for a future blog post on Gilding for more information on that process.) For this book, I used gold paint, rather than leaf.

Once the gold paint was dry, I started with the solid, dark colors. First the red, then blue, green, and brown, as shown below:

Once all the solid colors were in, I began layering the lighter colors on top, to add detail and depth. The final color was white, and my little bestiary painting was complete.

Following are a few photos of the completed accordion book:

Note to reader: If you would like to register for a workshop on Bestiary Painting, offered periodically by The Abbey Studio in Marblehead, Massachusetts, USA, check our workshop schedule.

← Prev: Golden Rule for Book Design Next: A Visit with Some Manuscripts at the British Library →