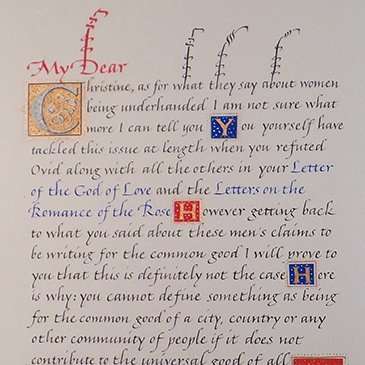 By Maryanne Grebenstein — When you look at The Abbey Studio’s logo, you’ll see an illustration of a winsome monk with a quill, working on a masterpiece of calligraphic art. Who you don’t see in the illustration are the women who worked behind the scenes. Wait… what? Yes, while we usually envision a room full of (male) monks working industriously on medieval manuscripts, historically, women did work on them as well! It may seem almost as incongruous as showing the monk typing on a computer, but it’s true. In an earlier blog about the history of medieval manuscripts, I wrote about how for much of the time period in which illuminated manuscripts were produced, the work was performed by monks in monasteries affiliated with the church. So, when I began my studies of medieval and Renaissance manuscripts, I was surprised to come across historical information about medieval author Christine de Pizan, who it seems to me is my kindred spirit. Some of my life experiences have been similar to hers, and her story touches my heart. So, in honor of Mother’s Day, I’m spotlighting this woman on the forefront of medieval literature and the book arts. Christine de Pizan (or sometimes her last name is spelled “de Pisan”) is regarded as one of Europe’s first female professional authors. Born in Venice in 1364, she was the daughter of an Italian scholar, Tommaso di Benvenuto da Pizzano, who was part of the court of Charles V of France. When she was five years old, Christine was sent to France where her father educated her in literature, Greek, Latin, and other subjects, as well as the ways of the French court. She had access to a large library of books on many subjects including history, astrology, science, and religion. It was here she was first exposed to the philosophical discourse of the day. 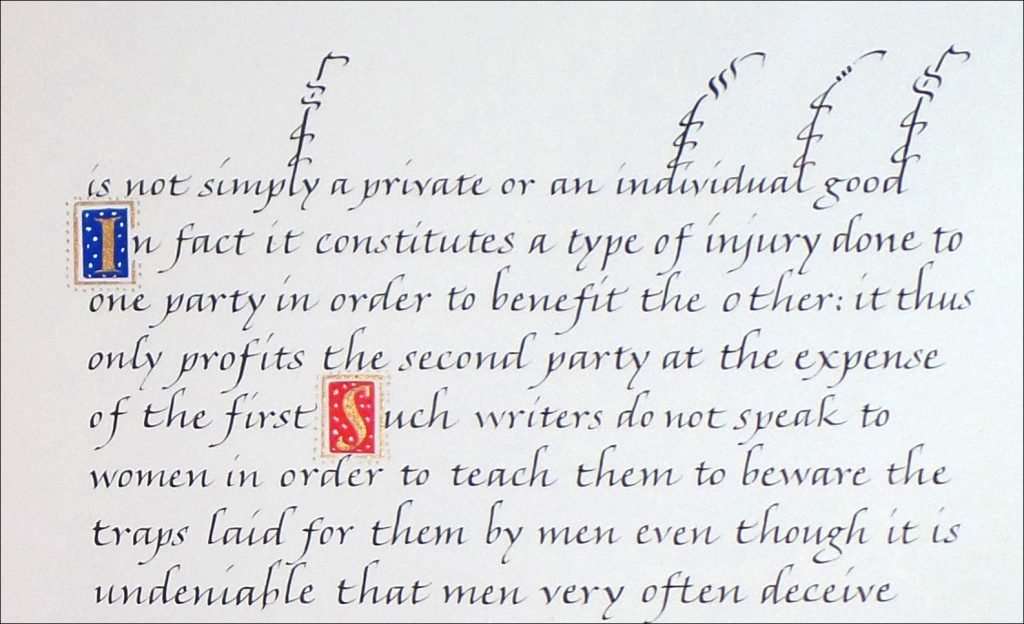 Close-up of a portion of a manuscript page written out by Maryanne Grebenstein with text by Christine de Pizan from “The City of Ladies.”

In 1380, the 15-year-old Christine married Étienne du Castel, a 24-year-old member of the French court. The couple had three children (a girl and two boys), and enjoyed a mutually respectful relationship. Étienne encouraged Christine’s intelligence and her love of poetry and self-expression. In 1389, Étienne died tragically during a bout of the bubonic plague while he was traveling in northern France with the king. This left 25-year-old Christine alone to raise her children and support her family. Unfortunately, she no longer had family ties to the French monarch on which she could depend financially. English monarch Henry IV and Milanese ruler Visconti both offered her a place in their courts, but Christine did not want to leave France. Instead, she decided to make her way as a writer – an unorthodox choice, especially for a woman. Fortunately, Christine was well respected and secured the patronage of the French queen, Isabel of Bavaria, and several nobles, enabling her to support her family. (We have Isabel of Bavaria to thank for the preservation of a significant portion of Christine’s work.) A remarkably prolific writer, Christine wrote dozens of major works and hundreds of ballads and poems. During her lifetime, she gained renown in literary circles throughout Europe and Britain. Early in her career, Christine wrote many popular poems and ballads expressing her emotions – particularly her sadness and uncertainty after enduring her husband’s death. Her longer works were far more sophisticated but did not have as much popular appeal. The work was verbose, complex, and stylized, and she experimented with literary themes and subjects that were not easily approachable by readers uneducated in the intellectual issues of the period. However, in particular, her prose histories, political essays, and her biography of Charles V have been acclaimed by generations of critics. She is regarded as one of the most important intellectuals of her day and certainly the most noted female writer of the medieval period. Further, Christine remains known centuries after her death for her writings defending and promoting women. Considered to be, in contemporary language, a feminist, her writings sought to challenge the notions of women’s roles in society and advocated for social standing and improved access to education for women. She became involved in a literary debate in 1401, questioning the unjust slander of women in Jean de Meun’s “Romance of the Rose,” which allowed her to expand her influence beyond the court and establish a reputation as an intellectual in literary circles. 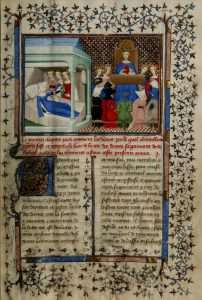 Manuscript page from “A Medieval Woman’s Mirror of Honor.” Courtesy of the Boston Public Library.

Her two most famous works are “Le livre de la cité des dames” (“The Book of the City of Ladies,” also called simply “The City of Ladies”) and “Miroir d’une femme médiévale d’honneur: Le trésor de la cité des dames” (“A Medieval Woman’s Mirror of Honor: The Treasury of the City of Ladies,” also called “The Book of the Three Virtues”), completed by 1405. The first, “The City of Ladies” told the life stories of women of virtue and achievement, and the importance of their contributions to society. The author’s character is urged by three allegorical figures (Reason, Justice, and Rectitude) to build a utopia for women. The literary device gave Christine a platform to examine the source of women’s low social status and to argue that women deserved the same right to education as men because they were socially and intellectually equal. As you can imagine, for some this was perceived as a threat. For women of the time, it was inspirational. In the second, companion, piece, “A Medieval Woman’s Mirror of Honor,” Christine brings back the figures of Reason, Justice, and Rectitude, who urge her to advise women from the different social classes about their roles in society and how they should behave to ensure their worthiness to enter the utopia from “The City of Ladies.” Within this text, Christine provided glimpses into women’s lives within the diverse social classes, preserving valuable historical insight into the period. 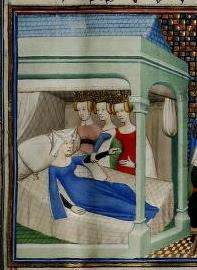 Close-up of a miniature painting from “A Medieval Woman’s Mirror of Honor,” depicting the author kept from rest by the Three Virtues. Courtesy of the Boston Public Library.

Queen Isabel (also seen spelled as “Isabeau”) in approximately 1410 commissioned copies of all that Christine had written, resulting in production of a manuscript of her collected works up to that time, commonly called “The Book of the Queen” and completed around 1414. It was created with the finest of pigments and gold leaf by master artisans including The Master of the Cité des Dames and the Master of the Duke of Bedford. Additionally – as if the description of Christine’s life hasn’t been impressive enough so far – most scholars agree that she would have supervised and directed the scribes as they wrote out her text. Some scholars believe that portions of the manuscripts’ calligraphy were even written out by Christine herself. (Really, she’s my kindred spirit!) In her book, “Christine de Pizan’s ‘Epistre Othéa,’” medieval scholar Sandra Hindman states that Christine’s activity as a scribe has been well documented, and much evidence has been brought forward to confirm that she supervised the writing of her manuscripts. In addition, Christine is frequently credited with a substantial role in creating the paintings (miniatures) that decorated her manuscripts, planning the images and supervising the miniaturists who worked for her just as she oversaw the scribes. I think you’ll agree that Christine de Pizan was a very remarkable woman! 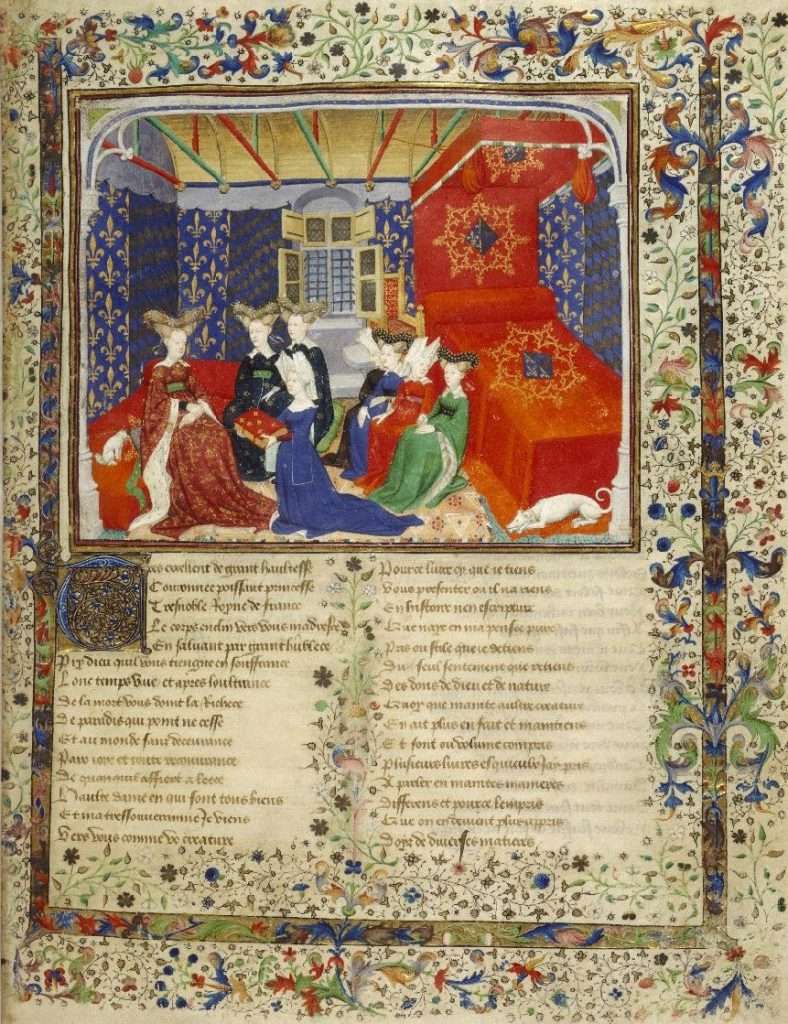 A page from the manuscript, “The Book of the Queen,” commissioned by Isabel of Bavaria. Courtesy of the British Library.

As for her children, Christine’s daughter entered the Dominican Abbey in Poissy in 1397 as a companion to the king’s daughter, Marie. Her eldest son, Jean, was invited to live with John of Montagu, Third Earl of Salisbury, who had a son about the same age as Jean. This was a not-uncommon act of generosity, and an opportunity in which Christine would have hoped Jean would become educated and Montagu would secure him a place in the court of Richard II. Sadly, Christine’s youngest son died sometime around the year 1410. Throughout Christine’s life, France and England were engaged in a series of battles known as the Hundred Years’ War (1337-1453), which had a significant impact on Christine. She wrote “Lamentations sur la guerre civile” (“Lamentations on the Civil War”) and “Livre de paix” (“Book of Peace”) in which she urged an end to war. When the English defeated the French army in 1415 at Agincourt she took it hard, retiring three years later to the same convent in Poissy that her daughter had joined, and stopped writing for the next 11 years. Christine’s last written work, “Ditié de Jehanne d’Arc” (“The Poem of Joan of Arc”), c. 1429, celebrated the early victories of Joan of Arc, who inspired Christine with her passion and heroism – to Christine, representative hallmarks of the virtues of all women. Christine died at Poissy about two years later. 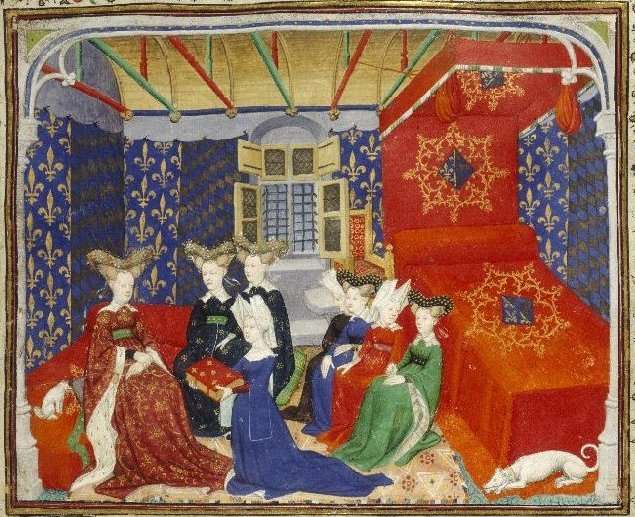 Close-up of a miniature painting from “The Book of the Queen,” depicting Christine de Pizan presenting her manuscript to Isabel of Bavaria. Courtesy of the British Library.

Special announcement: The Abbey Studio will host a free visit to the Boston Public Library’s Rare Book Room on July 21, 2016 to view selected medieval manuscripts, including work by Christine de Pizan! It’s an awesome opportunity to see magnificent work. Update: Check our Facebook page for photos of the wonderful manuscripts viewed during this event.
← Prev: Monsters Invade Medieval Maps! Next: Once Upon a Time at Château de la Napoule →