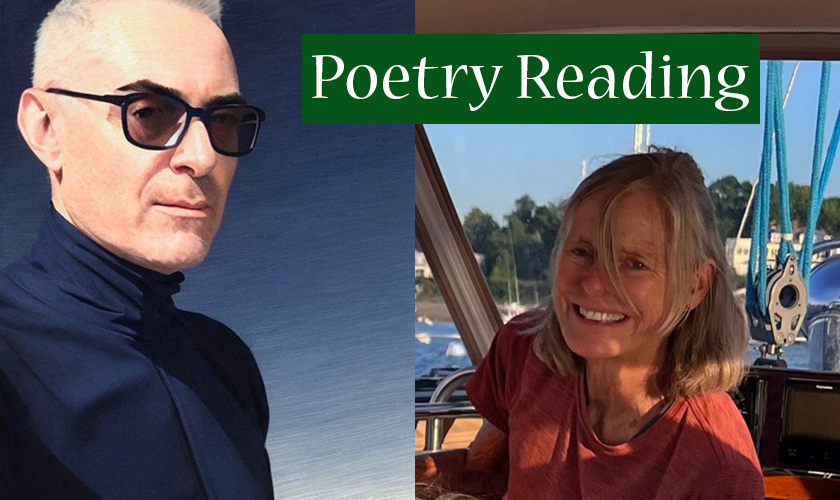 Join us for a reading of original poetry by local poets Peter Bottéas and Stephanie Shelley. It’s free and registration is not required. Light refreshments will be served.

Peter Bottéas: A native of Toronto, Canada, Peter Bottéas holds a Master’s degree in Translation from the Université de Montréal and worked for many years as a translator, revisor, editor, and educator in French Canada. After a twenty-year detour as a psychotherapist in Boston, he recently returned to one of his first loves, literary translation, and is currently the primary translator of Greek Boston-based poet Vassiliki Rapti. His translation of Rapti’s most recent collection of poetry, Bathed in Moonlight, is to be published by Červená Barva Press in early 2023. The author and translator have done several poetry readings together in New York and Boston, as well as in online forums. He is a member of the multidisciplinary think-tank and creative forum Citizen TALES Commons and, along with Vassiliki Rapti, is co-host of the podcast series Borders Unbound: Hellenic Poetry of the Diaspora and Beyond. Peter is also an occasional voice-over artist, an infrequent poet, and an aficionado of French and Greek poetry set to music.

Stephanie Shelley grew up in Marblehead and has a strong affinity for the ocean, especially the Northeast Atlantic Coast. She is the fifty-two-year partner of her husband, Peter Shelley, the mother of two sons, and the grandmother of three granddaughters and one grandson. She has been a psychotherapist for thirty-two years, specializing in Bioenergetic therapy with adults and DDP, an attachment-based therapy, with children and their parents. She is a lifelong learner, a book lover, a sailor, and a poet. For the past decade, she has worked with Tom Daley, a poet and teacher in the Boston area.

By: The Abbey Studio