Can Captain Jack Sparrow Make You a Better Calligrapher? 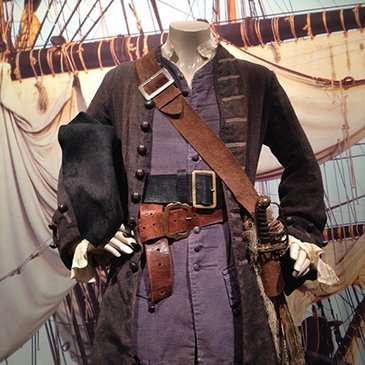 By Maryanne Grebenstein – I recently had the pleasure of enjoying an exhibition called, “Cut! Costume and the Cinema” at the Heritage Museum and Gardens (www.heritagemuseums.org) on Cape Cod in Sandwich, Massachusetts. It was interesting and really fun to see some very recognizable costumes: Johnny Depp’s Captain Jack Sparrow costume is there, as is a lovely costume worn by Emma Thompson in Howard’s End, and Kate Winslet’s costume from Sense and Sensibility, to name just a few. 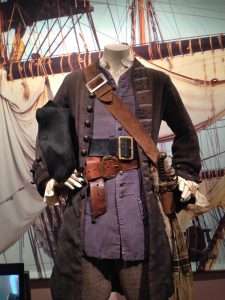 Captain Jack Sparrow’s costume worn by Johnny Depp in “Pirates of the Caribbean: The Curse of the Black Pearl” 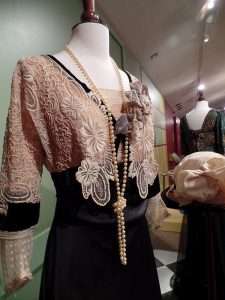 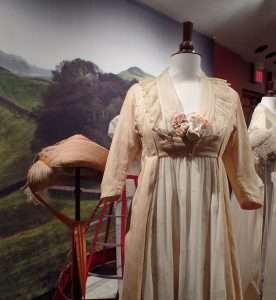 One of the things that struck me was the attention to detail. The costumes are beautifully executed. The beaded embroidery and fringe in the costume from Mrs. Dalloway gives a hint at the exquisite workmanship used to create these costumes. The detail and historic accuracy undoubtedly help transport the viewer to a certain time and place in much the same way that they help the actors transform into the characters they portray.

It got me thinking about the importance of using historic examples as a source – something I often tell my students about calligraphy. Alexandra Byrne, the costume designer for The Phantom of the Opera understood perfectly the importance of using historic references. When she received her academy award for costume design for Phantom, she explained “I learned all about the period to be able to throw it away and interpret it for myself.” 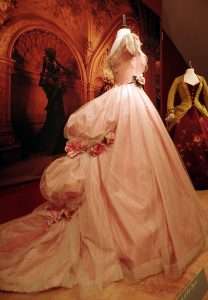 Imagine trying to design a costume like the one worn by Randy Quaid in Goya’s Ghosts without some historic reference. 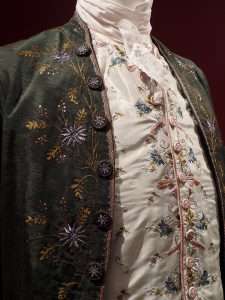 Francisco Goya lived during the late 18th and early 19th centuries, so historic examples may not be prevalent, but they do exist. They can be found in museums or possibly even antiques shops and auction houses. And certainly, paintings from that era can be found in many museums to aid the designer. But suppose a character came from a time period so long ago that we have few, if any, actual historic samples to draw from; for example, the designer charged with creating the costume for Baroness Rodmilla De Ghent, a fictional character who supposedly lived during the late 16th century. Where would he or she go for historic examples? Why, he or she would go to illuminated manuscripts, of course! Not only are manuscripts a nearly inexhaustible source for calligraphy and lettering styles, they also provide us with the best window into medieval and Renaissance daily life – including fashion – that exists. 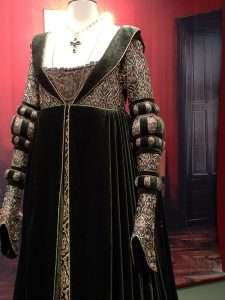 There are many manuscripts that give wonderfully accurate and fascinating glimpses of life as it was lived hundreds of years ago. One example is shown here: 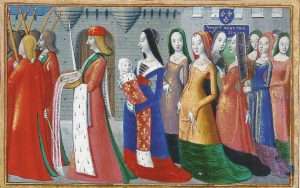 This image from a French manuscript (created in Paris circa 1485) shows the baptismal procession of Charles VII and it includes fashion details such as the V-collared gown worn by the chief godmother (note the similarity to Rodmilla’s neckline!). This was a style that was more popular 15 or so years earlier, indicating her advanced age compared to the other ladies. Also note the square neckline worn by the younger ladies, the head gear for all individuals, including the red beret worn by one of the knights, the funnel cuffs, and the ermine and fleurs-de-lis trim. These details are all very accurate depictions of fashions of the late 15th century worn by high-ranking members of the court. Without the benefit of historic examples, a costume designer would be left to imagine what the appropriate fashion might be. It would be very easy for designers to convey incorrect information regarding what kind of clothing would customarily be worn during a certain time period, without realizing they are making a mistake. The same is true with calligraphy and hand lettering. Without the use of historic examples, it’s very easy to develop bad habits and imitate poorly made letters without realizing the mistakes. We need to study the pen angle, the letter slope, and the letter proportion of historic examples in order to shape our letters correctly. Of course, over time, taking some artistic license and making some changes to make a style your own is perfectly acceptable. But it’s best to know the rules before breaking them, so that you can, well, break them correctly! If you are interested in seeing historic examples of medieval manuscripts that can be found in the Boston area, watch for my upcoming post called “A Visit With Some Very Special Books,” which will have photos from our group visit to the Rare Books Room at the Boston Public Library. Also watch for a future post, “Using Historic Examples for Calligraphy” where I’ll explain some ways in which you can use old manuscripts to improve and inspire your calligraphy. The Heritage Museum and Gardens website states that the “Cut! Costume and the Cinema” exhibit is “organized by Exhibits Development Group, USA in cooperation with Cosprop, Ltd, London, England” (www.cosprop.com). Photos of costumes by the author.
← Prev: Classroom Abroad at La Napoule Next: The Brilliance of Hermann Zapf →