Calligraphy and Painting on Vellum 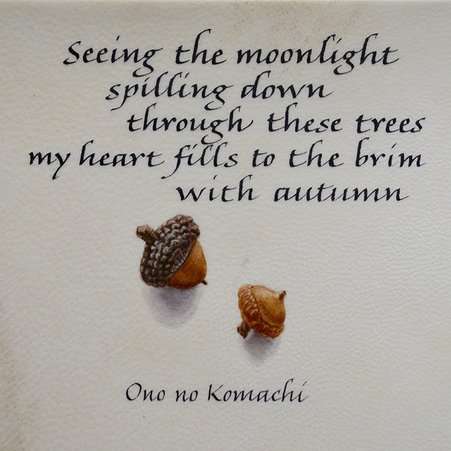 By Maryanne Grebenstein and Fionnuala Hart Gerrity – Part 1 by Maryanne Grebenstein I’m delighted to be collaborating with Fionnuala Hart Gerrity on a new workshop. Fionnuala is a multi-talented artist and bookbinder. She’s been experimenting with painting on vellum recently (vellum is a prepared animal skin that has been used as a writing surface since the Middle Ages), so we decided to join forces and offer a workshop that would combine calligraphy and painting in much the same way that the decorations in many of the manuscripts from the Middle Ages and Renaissance were created. Vellum’s sturdiness is one of the reasons that many old manuscripts have survived to this day. Many people believe that when creating manuscripts and calligraphic artwork the decoration is done first and the calligraphy second; however, it’s actually the other way around. The text always goes in first; if gold is used it is put in the manuscript second; and the color comes last. Knowing this helps demonstrate how critically important it is to have a thoroughly planned layout before any lettering is begun. In our collaboration, I execute the calligraphy and then Fionnuala does the painting. I began with a particular piece of vellum that was prepared in a way that the surface was solid and non-textured. This allowed me to draw and erase pencil guidelines for my calligraphy. Often when lettering on vellum I avoid drawing pencil lines because they can smear and be difficult to completely erase from the vellum. There are other techniques (such as using a stylus or drawing lines with a light coat of Armenian bole – watch for future blogs discussing these treatments) that I can use on vellum, but with this piece I could use my usual pencil technique. Here’s a photo of the vellum with the pencil guidelines drawn. 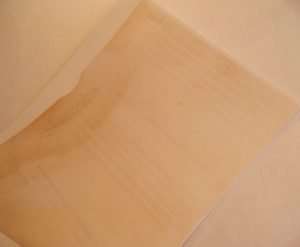 Fionnuala had provided me with a sketch of the painting she planned to add, so that I was able to plan my layout to accommodate the future painting. Once the pencil guidelines were in, I laid a piece of drafting vellum (which, to avoid confusion over the two “vellum” materials, I will call tracing paper for the rest of this post) over the vellum and lettered the text, with appropriate line breaks, so that I could be certain of exactly how much space each line of text would take up. This technique allows me to plan out where to position each line of text very precisely, enabling me to mark the vellum to indicate where I want each line to begin and end.

First draft of the lettered text on tracing paper

There are several techniques for accomplishing this. For this project I used a technique whereby I folded the tracing paper between each line of text so that I could hold the folded tracing paper directly below where it would be lettered, using it as a guide for the lettering, like this: 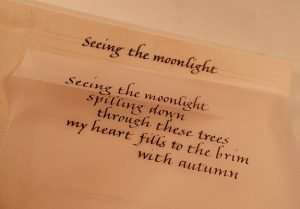 Using the draft version to align the lettering 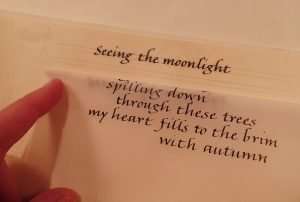 Using the draft version to help center the final lettering 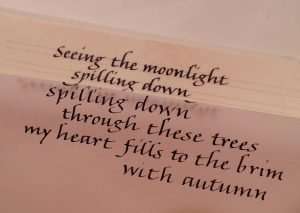 Another view of using the draft to help letter the final

Once all the text was lettered and completely dry, I simply erased the pencil lines. You can see in this photo how I left space to accommodate the future painting that Fionnuala would do. Then, much like scribes in the Middle Ages, the vellum was sent to Fionnuala to paint the miniatures. 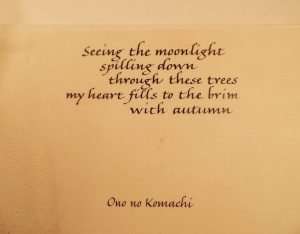 The finished lettering on vellum

Part 2 by Fionnuala Hart Gerrity It has been a pleasure to collaborate with Maryanne on our “Calligraphy and Painting on Vellum” workshop to teach painting and calligraphy, and on this demonstration piece. While our process is similar to traditional manuscript production, we have been able to collaborate more closely than Medieval and Renaissance painters, gilders, and scribes might have done in large manuscript production centers. In a traditional manuscript, the scribe would leave a specified amount of space blank for the painter, sometimes with a note of what scene should be depicted. Maryanne and I were able to plan out this piece using a sketch of the subject beforehand. First I sketched the subject — two acorns — in graphite. The acorns were placed on a piece of cream paper so that, during painting, the background would be similar in color to the vellum painting surface. 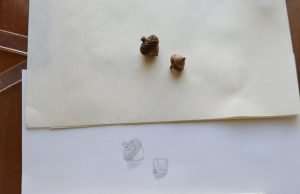 Sketching the acorns on draft paper

My drawing focused on the placement of the acorns, their outlines, and large areas of light and shade. When complete, I gave Maryanne a copy of the image so that she could leave sufficient space for the painting when designing the layout for the lettering. 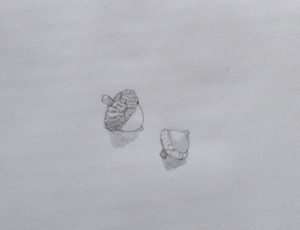 The finished pencil sketch on paper

After Maryanne completed the lettering on the vellum and provided it to me, I traced the acorns’ outlines and major shadows from my drawing onto a piece of tracing paper. I coated the back of the tracing paper with soft graphite (2B), and transferred the subjects’ outlines to the vellum. Once the drawing was transferred, I corrected it and added more detail with a harder graphite (HB or H) and erased the soft graphite transfer. The harder graphite is much less likely to smudge or erase. After correcting the drawing, I dusted the surface with gum sandarac to make the surface more receptive to paint, and painted over the graphite outline with watercolor. 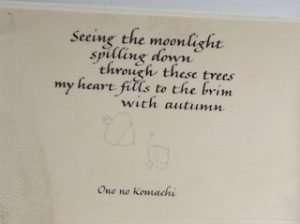 The acorn pencil sketch transferred to the vellum

I began painting the body color using watercolor paints diluted with water. As I built up layers of paint for the shadows and textural details, I began to add a small amount of medium (gum arabic) along with water when mixing colors. Because vellum is not very porous to watercolor, the paint sits on top of the surface rather than absorbing into the fiber structure as it would with paper. For this reason, preparing the paint for the additional layers requires care, since if a new layer of paint is too watery, it will re-activate the layer below and the two will mix together chaotically. Using gum arabic as a medium allows the paint to flow over previous layers without reactivating them. After building up the body color and shadows, I added highlights using an opaque white to increase the tonal contrast. 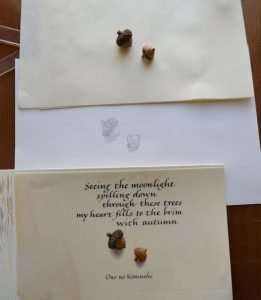 The completed calligraphy and painting on vellum, with acorns

Once complete, we have a delightful piece of artwork with both calligraphy and painting, rendered on vellum much like the manuscripts of the Middle Ages. 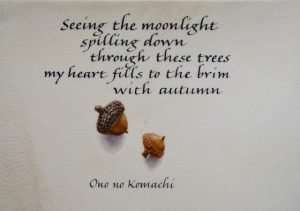 Check out the “Classes” page on this website to view our upcoming class schedule. “Calligraphy and Painting on Vellum” will next be held over two consecutive weekends, January 21-22 and January 28-19, 2017 in Hingham, Massachusetts.
← Prev: A Christine de Pizan Manuscript Next: Fooling the Eye →