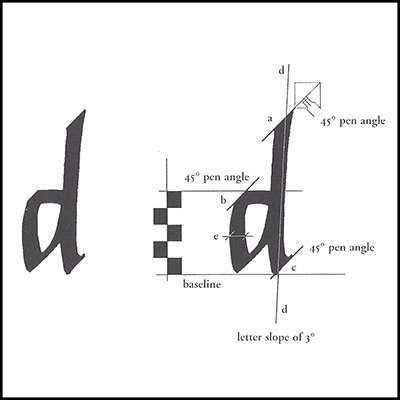 By Maryanne Grebenstein — In 21st century America, it is easy for us to associate calligraphy with contemporary uses such as wedding invitations and table accessories. But calligraphy has a rich and noble history that predates our country by centuries. We need only turn to documents such as The Book of Kells, perhaps the most famous medieval manuscript, believed to have been created sometime during the seventh century (debates still rage on its exact date and location of creation) or the Lindisfarne Gospels (circa 700) to see that calligraphy has been around for a long time. 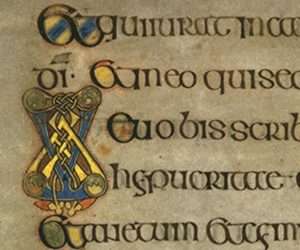 This image is a detail of folio 100v, a page from St Matthew’s gospel from The Book of Kells, Trinity College, Dublin 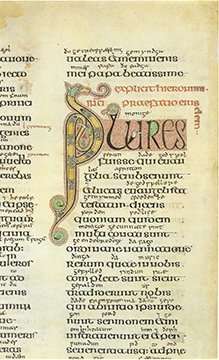 In a previous post called “Can Captain Jack Sparrow Make You A Better Calligrapher?” I talked about how important it is to use historic examples as a guide and model – not only in calligraphy but in many other fields as well, including costume design. In today’s post I’d like to help you learn how to analyze an existing letter to determine its pen angle (how the pen is held in relation to the writing line), letter slope (how slanted or upright the lettering is) and pen scale (the relationship between the thickness of the stroke and the height of the letter). Anyone who has tried their hand at calligraphy should be somewhat familiar with pen angle, letter slope, and pen scale. But usually we talk about these characteristics as aids to help us create better letters as we write. Today we’re going to work a little backwards – we’re going to determine these characteristics in a letter that has already been written. Understanding these characteristics is important because they are what allow you to create letters correctly and consistently. For this article they are important because they are the infrastructure of any letter. Once you “dissect” an existing letter, you should be able to make a very similar-looking letter by applying the same pen angle, letter slope, and pen scale. Learning how to analyze letters is the first step in learning how to accurately duplicate them. Let’s take a look at this letter ‘d’ that I’ve created to help you understand how to determine those key elements previously mentioned. I will walk you through this process using my hand lettered “d,” but you can try this exercise with any letter – hand-lettered or typographic – as long as it is large enough for you to be able to get true measurements. In order to accurately perform this exercise you will need a T-square or triangle, a protractor, and a .05 or .03 mechanical pencil. Important note: the x-height (mentioned below) is the height of the base letter without an ascender or descender; the checkerboard pattern below fills the x-height. 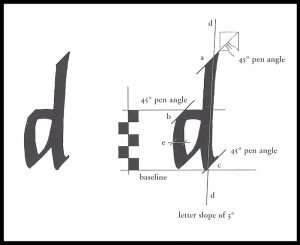 Using the lower case “d” I’ve drawn above, follow these simple instructions to determine the pen angle, letter slope, and pen scale of a letter. Let’s apply this technique to the image from The Book of Kells. By drawing lines as shown, we can see the pen angle (how the pen was held), the letter slope (in this case it is perfectly vertical), and how tall the letter is compared to the width of the nib, or its pen scale. Knowing this information will help us re-create the look of the historic letters. 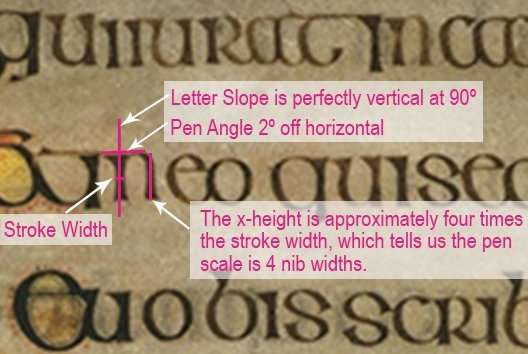 Measurement analysis on a letter from The Book of Kells

Without the use of historic examples it’s very easy to develop bad habits and imitate poorly made letters without realizing the mistakes. Of course, over time, taking some artistic license and making some changes to make a style your own is perfectly acceptable. But it’s best to know the rules before breaking them, so that you can, well, break them correctly! Using historic examples for calligraphic works isn’t limited to just the calligraphy. In my next blog post, we’ll take a look at using the border artwork in the 15th-century manuscript known as The Prayer Book of Michelino Da Besozzo (M 944 in the Morgan Library collection) as inspiration in a manuscript I created that I titled Love Never Ends.
← Prev: Illuminated Manuscripts "Beyond Words" Next: A Medieval-Style Binding →