A Visit with Some Manuscripts at the British Library 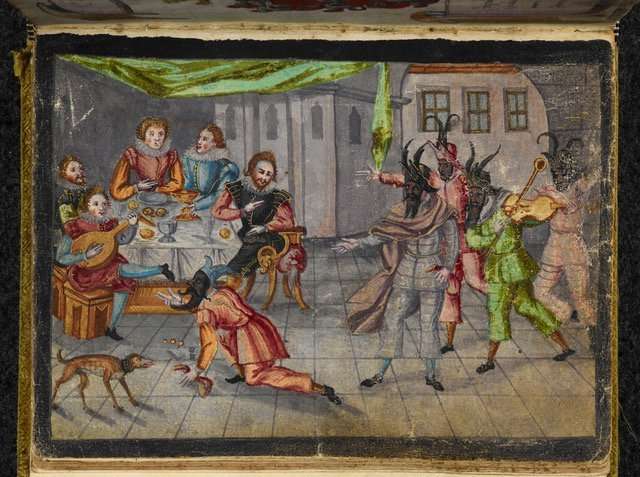 One of the very fun aspects of my work at The Abbey Studio is that from time to time I organize trips – sometimes domestic, sometimes international – related to illuminated manuscripts and calligraphy. I recently took a group to London and Cambridge to do a little manuscript viewing and to participate in a workshop conducted by Patricia Lovett. The trip lasted a week and in this blog post I’ll talk about the manuscripts we saw at the British Library.

As usual with our trips, we all met at Logan airport in Boston and traveled as a group from there to London. One of the first things calligraphic we ran into was a simple sandwich sign for a local café near our hotel. Here we were, after only a few hours in London, face to face with a Zen-Tangle letter T (photo 1). Some of you know we’ve offered a Zen-doodle workshop in the Marblehead studio/shop several times before and will be offering another one this summer. On this website you can sign up to receive our enewsletter so you’ll be notified whenever we publish a new schedule.

Next stop: the British Library. There is almost always a display of manuscripts in the Treasures Room at the library even when there is no formal exhibit of illuminated manuscripts, and this time was no exception. Among the beauties we enjoyed was the Luttrell Psalter, or book of psalms, (photo 2) which was created around 1320-1340. Commissioned by Sir Geoffrey Luttrell in Lincolnshire, England it is known for its wildly imaginative creatures as well as depictions of everyday life in 14th-century England. 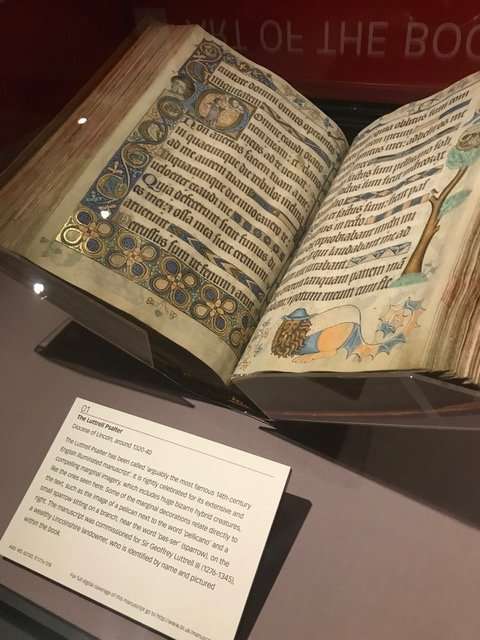 Photo 2: From the Luttrell Psalter

We also encountered a manuscript containing an account of the Loch Ness monster from before the year 600 (!) (photo 3). 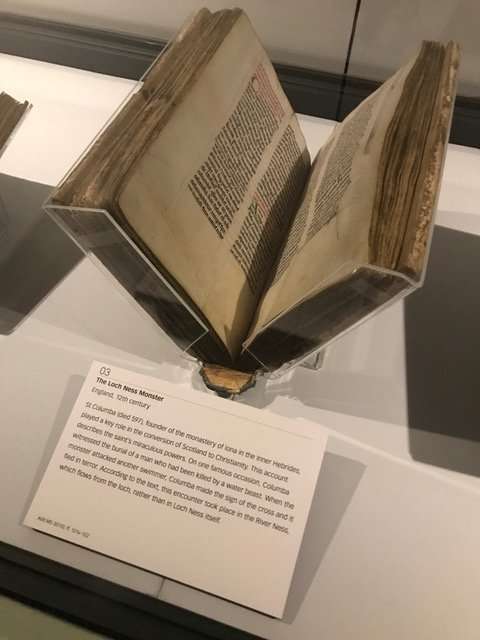 The manuscript, written in the 12th century, recounts an experience of St. Columba. St. Columba died in 597, and he was the founder of the monastery on the island of Iona in Scotland that is believed to be where the Book of Kells was started (before having to relocate to escape Viking raids). The manuscript we saw in the library relates that St. Columba witnessed the burial of a man who was killed by a “water beast.” The story goes that when the water beast attacked another swimmer, Columba made the sign of the cross and the beast “fled in terror.” The text identifies this incident as having taken place in the River Ness, which flows from the loch.

Another very interesting piece on display is the earliest surviving manuscript containing the story of Sir Gawain and the Green Knight (photo 4) created around 1400. 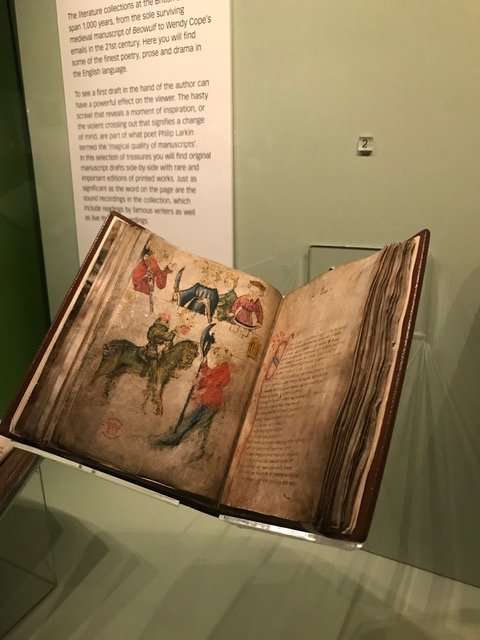 Somehow, the manuscript escaped ruin in a fire in 1731 but you can see in the photo that it did sustain damage. It is because of this very manuscript that the story of Sir Gawain and the Green Knight survived to be known today. In the image on display, Sir Gawain is holding the head of the Green Knight.

We saw an unusual example of a manuscript with three columns of text (photo 5). It is the Arnstein Bible, from the late 12th century and it has three large, decorated letter Bs – one at the top of each column – for Beatus. One column is written in Hebrew and two in Greek. Because of these comparison texts it is believed this manuscript was intended for study. 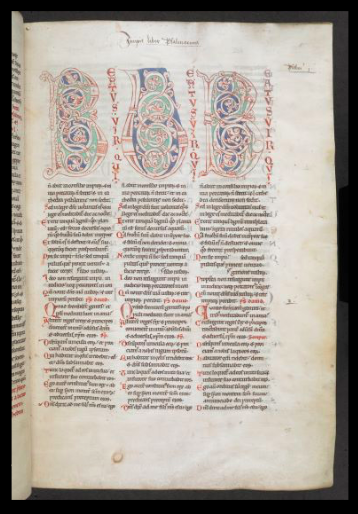 The exhibits in the Treasures Room aren’t limited to medieval and Renaissance manuscripts. The range is broad, and some of the more contemporary pieces include items such as music and lyrics hand written by John Lennon and Paul McCartney. One of the more interesting exhibits we saw this time was on Friendship Albums. These fascinating little books are manuscripts oftentimes created by college students in the 17th and 18th centuries, and they contain beautiful paintings, poems, autographs and descriptions of events during the author’s life (photo 6). Billed as “Friendship Before Facebook: Social Networks in a Pre-Digital Age,” the exhibit showed some very interesting social activities of a privileged young adult during that time period.

Fortunately for everyone who is interested in illuminated manuscripts, many museums and libraries have digitized their manuscript collections and this is the case with the British Library (https://www.bl.uk/manuscripts/). It’s not as wonderful as a first-hand, up-close experience with a medieval or Renaissance manuscript, but it’s not a bad second!

See my separate blog about our visit to view manuscripts at the Parker Library in Cambridge UK, and a third blog about the workshop.

← Prev: Making a Small Bestiary Next: Lions and Tigers and Bears! A Visit to Cambridge, U.K. →