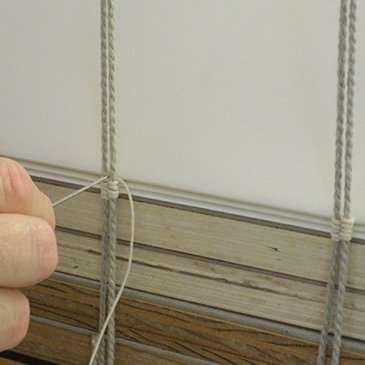 By James Reid-Cunningham – When Maryanne Grebenstein asked me to bind her manuscript by Christine de Pizan, I immediately thought that the binding should reflect the period of the author’s life. The challenge was that the manuscript is only a few leaves, while most books of the period were quite thick. So, period structures were rather overbuilt for such a slender manuscript. In addition, surviving bindings from the period have wooden boards and leather covering material. It would have been difficult to find quarter-sawn hardwood as large as Maryanne’s manuscript, plus the cost of a leather binding on that scale would also have been prohibitive. Because it was common for late medieval bindings to have a cloth “chemise” to protect the binding and to add vibrant color to the book, we agreed that the new binding would be covered velvet. The manuscript leaves would be sewn on supports, and the supports would be laced into the boards before covering the binding in cloth. These were common structural elements of the period; the binding wouldn’t be a facsimile of period binding, but would have a period feel. 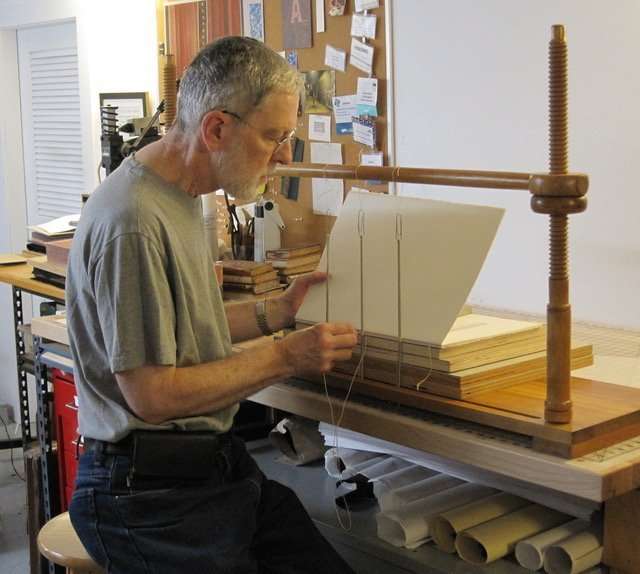 In the image I am using a sewing frame to hold the sewing supports taut while sewing. The earliest known image of a bookbinder comes from a 12th century German manuscript; it shows the binder holding a sewing frame. 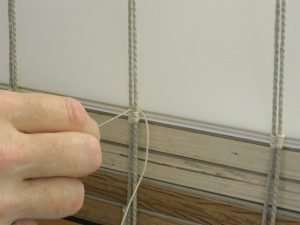 The manuscript was sewn on three pairs of linen cords. The stitch is rather like a figure-8, exiting each section and looping around both cords before re-entering the section. 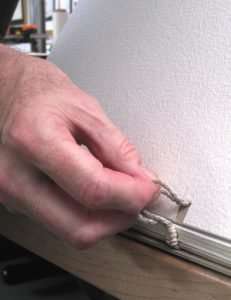 The cords were laced into the boards through channels and holes in the boards. 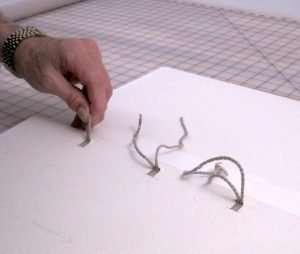 This laced structure provides a very strong attachment of the boards to the textblock (the laced signature of the book). Laced bindings are the origin of the reason that we refer to books as being “bound.” Originally, all of a book’s elements were tied together, not glued like modern books.

After the textblock was laced into the boards, the boards were covered in velvet. The greatest challenge in binding the Pizan manuscript was in adhering the velvet. Modern cloths have a range of chemical treatments that make them difficult to adhere, such as flame retardants, and coatings to prevent wrinkles. Historically, cloth would have been adhered with hide glue or starch paste, or with polyvinyl adhesives during the twentieth century. My attempts at gluing down the velvet failed with the hide glue and paste, and the PVA required pressure to adhere, which flattened the nap of the velvet. This ruined both the appearance and the feel of the velvet. I found that I could use an acrylic adhesive called Gudy-O to adhere the cloth. It is a layer of adhesive held between two sheets of paper that can be peeled off, rather like double-sided tape without the plastic carrier between the two layers. The challenge is that once the cloth touches the adhesive, it is set and cannot be moved or smoothed. So I removed one side of the outer paper and adhered the Gudy-O to each board individually. The other paper side was then peeled off and the cloth drawn carefully onto the board. The cloth was then turned around the board edges. Finally, the first and last leaves of the textblock were pasted down onto the inner boards. On the completed book, the binding isn’t titled on the spine. Titling only became common during the 17th century. Prior to that time, no one had so many books that they needed a spine title to help differentiate which book was which. The binding has a simple beauty, and it feels wonderful in your hands.   About James Reid-Cunningham James Reid-Cunningham is a bookbinder and conservator in private practice in Cambridge, MA. He studied history and art history at Johns Hopkins University and Tufts University before beginning his career in conservation at Harvard University. He studied bookbinding with Mark Esser at the North Bennet Street School in Boston. Following twelve years as the conservator of the Graduate School of Design at Harvard University, in 2003 he was named chief conservator of the Boston Athenaeum, a private membership library founded in 1807. After two years as associate director for digital programs and preservation at the Athenaeum, he served as deputy director from 2013-2015. James was the adjunct lecturer in book conservation in the graduate art conservation department at Buffalo State College (SUNY) from 2009 to 2013, and has conserved books from the libraries of George Washington and Benjamin Franklin. In 2006, he received the Distinguished Alumni Award from the North Bennet Street School. He served as the President of the Guild of Book Workers from 2006 to 2010.
← Prev: Analyzing Letters – the Best Way to Learn to Imitate a Lettering Style Next: A Christine de Pizan Manuscript →