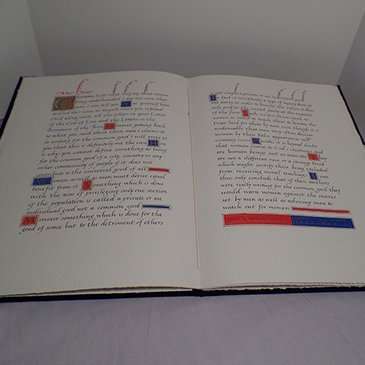 By Maryanne Grebenstein – Other than members of royalty, we know relatively few medieval women by name. And those that we do know, Joan of Arc for example, we know largely because of the circumstances under which they met their demise. Christine de Pizan (1364-1430) is an exception. She was an author and scribe who supported herself and her children after her husband’s death at an early age. You can read more about Christine in my earlier blog post, here. She authored several books, and one of her more well-known books is called “The City of Ladies.” The book is a dialogue between Christine and three allegorical characters: Reason, Rectitude, and Justice. Christine uses this platform, in a question and answer format, to discuss the virtues of women and to attempt to dispel the sexist attitude of Jean de Meun in his own recently published poem “Romance of the Rose.” I find Christine’s writings fascinating and I was compelled to hand letter an excerpt from “The City of Ladies” and create a small manuscript. Her message, although penned nearly 600 years ago, is remarkably relevant today. (See the bottom of this post for the full text). Although I used high quality art paper (not manuscript vellum) I attempted to create a manuscript with a look and feel authentic to the time period in which Christine lived. Once I had established the overall size and layout for the manuscript, I folded the folios to create a single signature. When the blank signature is assembled, a tool can be run up the edge of the signature to create a series of evenly spaced prick marks. (In Christine’s day, a scribe would have used a tool called a parchment runner. I had to improvise – the closest thing to a parchment runner I could get my hands on was a tracing wheel, sold at fabric stores.) Once these small marks were made on the top piece of paper, I used a tiny awl to create a small hole that went through the entire signature for each of the prick marks. It looked something like this: 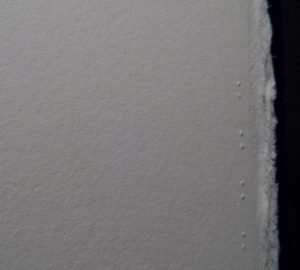 Series of tiny holes made with an awl through the signature

Since the holes run through the entire signature, when the bifolium is opened, you have a series of corresponding holes on the left and right edge of each piece of paper. These holes provide the basis for the guidelines that will be created for the lettering. A straight edge can be laid across the paper, lining up with the corresponding holes on either side of the bifolium.

Place a straightedge between two aligning marks to create a guideline

A guideline can then be drawn using either a stylus, a very fine mechanical pencil, or a crow quill pen filled with diluted Armenian bole. 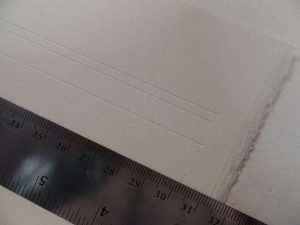 Guidelines drawn with a stylus

Once the guidelines were ruled and the text and decorations penciled in, I then lettered the text. I was hoping to produce a pure and elegant Italic lettering style – clean, straightforward, and no- nonsense – much like Christine’s message. After the text was lettered, the gold and silver paint were applied, and finally, the color added.

A portion of the lettering, completed 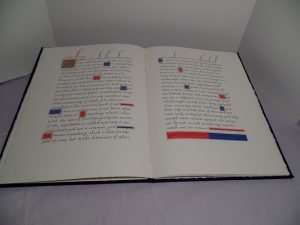 The completed two-page spread of the bifolium

Once the lettering and decoration were complete, I asked renowned bookbinder James Reid- Cunningham to create a binding for my manuscript (read his blog post about creating the binding, here). We discussed various designs for the binding and we both agreed that the wood boards that were frequently used for binding in the 15th century would be too heavy and cumbersome. We wanted something more feminine for this manuscript. Jim suggested using fabric, commonly used in a chemise binding of the middle ages. I loved the idea of a fabric and he created a beautiful binding using a delicious blue/purple velvet that is similar in structure to one that would have been made during Christine’s lifetime. Here is the stunning result of Jim’s efforts, complete with a clamshell box to protect the manuscript.

Completed book with text by Christine de Pizan, design and lettering by Maryanne Grebenstein, and binding by James Reid-Cunningham

It was so much fun to create this piece, I’m thinking of doing another Christine manuscript. But next time, I will take a step further into the authenticity of the piece and use manuscript vellum and 23 karat gold leaf.

The Text by Christine de Pizan

The text by Christine de Pizan that was included in my manuscript contains the words of Rectitude, responding to an inquiry by Christine regarding certain men having said how few women are faithful in love. It reads as follows: “My dear Christine, as for what they say about women being underhanded, I’m not sure what more I can tell you. You yourself have tackled this issue at length, when you refuted Ovid, along with all the others, in your Letter of the God of Love and the Letters on the Romance of the Rose. However, getting back to what you said about these men’s claims to be writing for the common good, I’ll prove to you that this is definitely not the case. Here’s why: you can’t define something as being for the common good of a city, country or any other community of people, if it doesn’t contribute to the universal good of all. Women as well as men must derive equal benefit from it. Something which is done with the aim of privileging only one section of the population is called a private or an individual good, not a common good. Moreover, something which is done for the good of some but to the detriment of others is not simply a private or an individual good. In fact, it constitutes a type of injury done to one party in order to benefit the other: it thus only profits the second party at the expense of the first. Such writers don’t speak to women in order to teach them to beware the traps laid for them by men, even though it’s undeniable that men very often deceive women by their false appearances and cunning ruses. Besides, it’s beyond doubt that women count as God’s creatures and are human beings just as men are. They’re not a different race or a strange breed, which might justify their being excluded from receiving moral teachings. I can thus only conclude that if these authors were really writing for the common good, they would warn women against the snares set by men as well as advising men to watch out for women.”
← Prev: A Medieval-Style Binding Next: Calligraphy and Painting on Vellum →